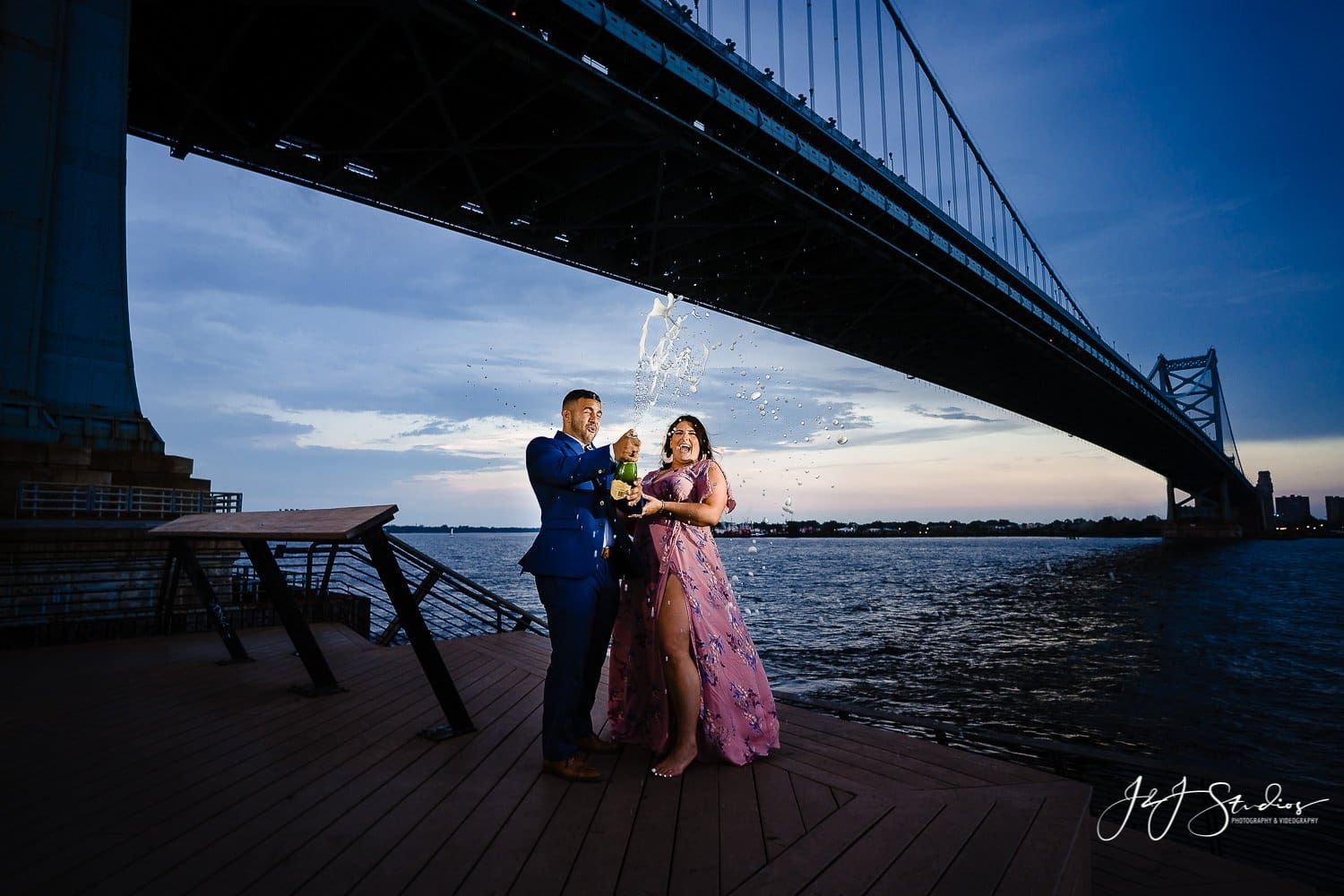 It was a blisteringly hot day in late June that Gemma + Steven joined us for their engagement shoot spanning Philadelphia City Hall, Old City, and the infamous Race Street Pier. Despite temperatures of 95F and high humidity, oven-baked Uber rides and sirens throughout the city, this couple stuck with us for an epic champagne shower finish overlooking the Delaware River Waterfront. Five minutes in, I had already soaked through my shirt and I was scampering down the sidewalk with Denida my assistant in tow to meet our clients at S Broad and Sansom for the epic City Hall shot. You know… this one. 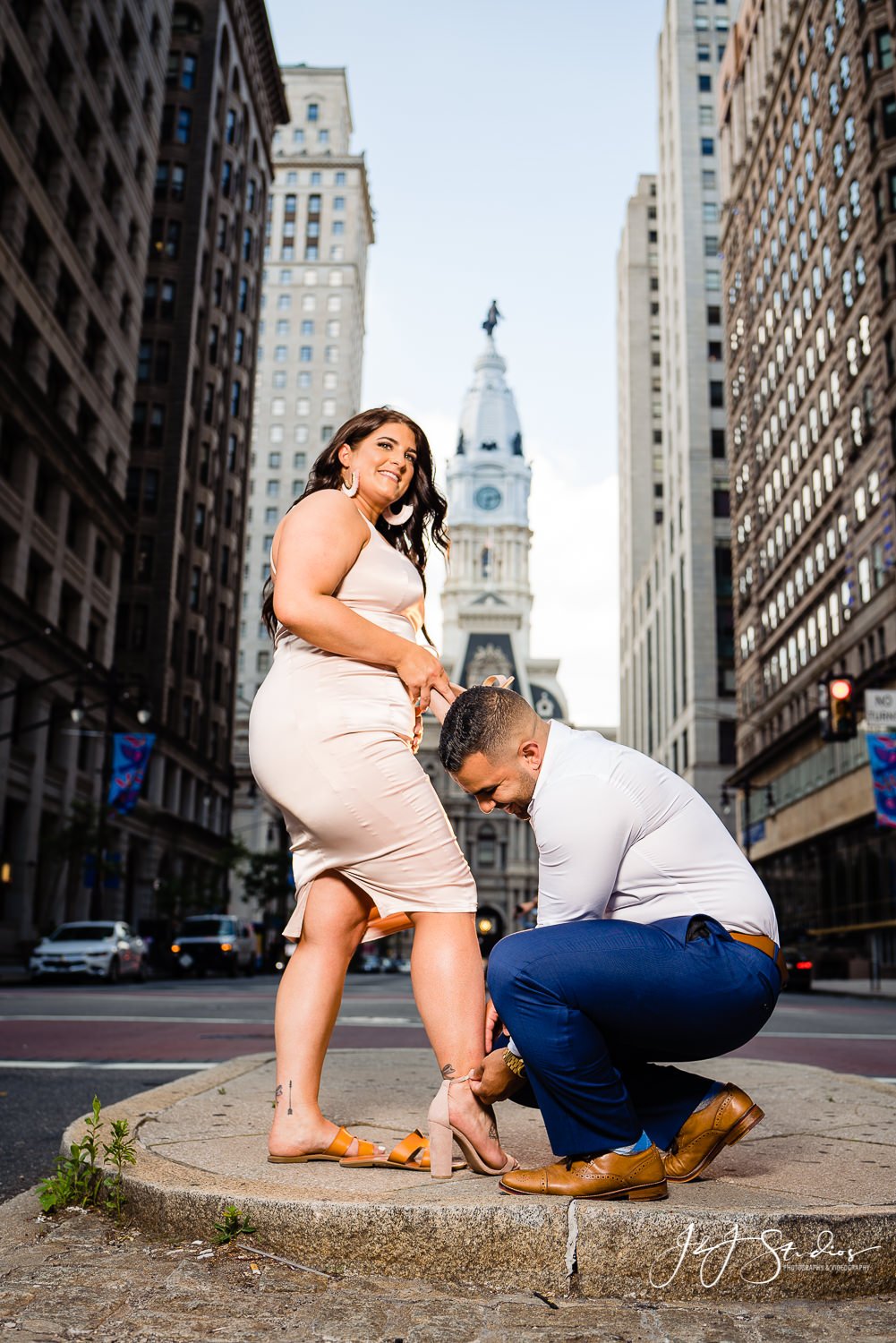 Whoops, that’s just a behind the scenes photo of Steven being a complete gentleman.  Here’s the finished shot: 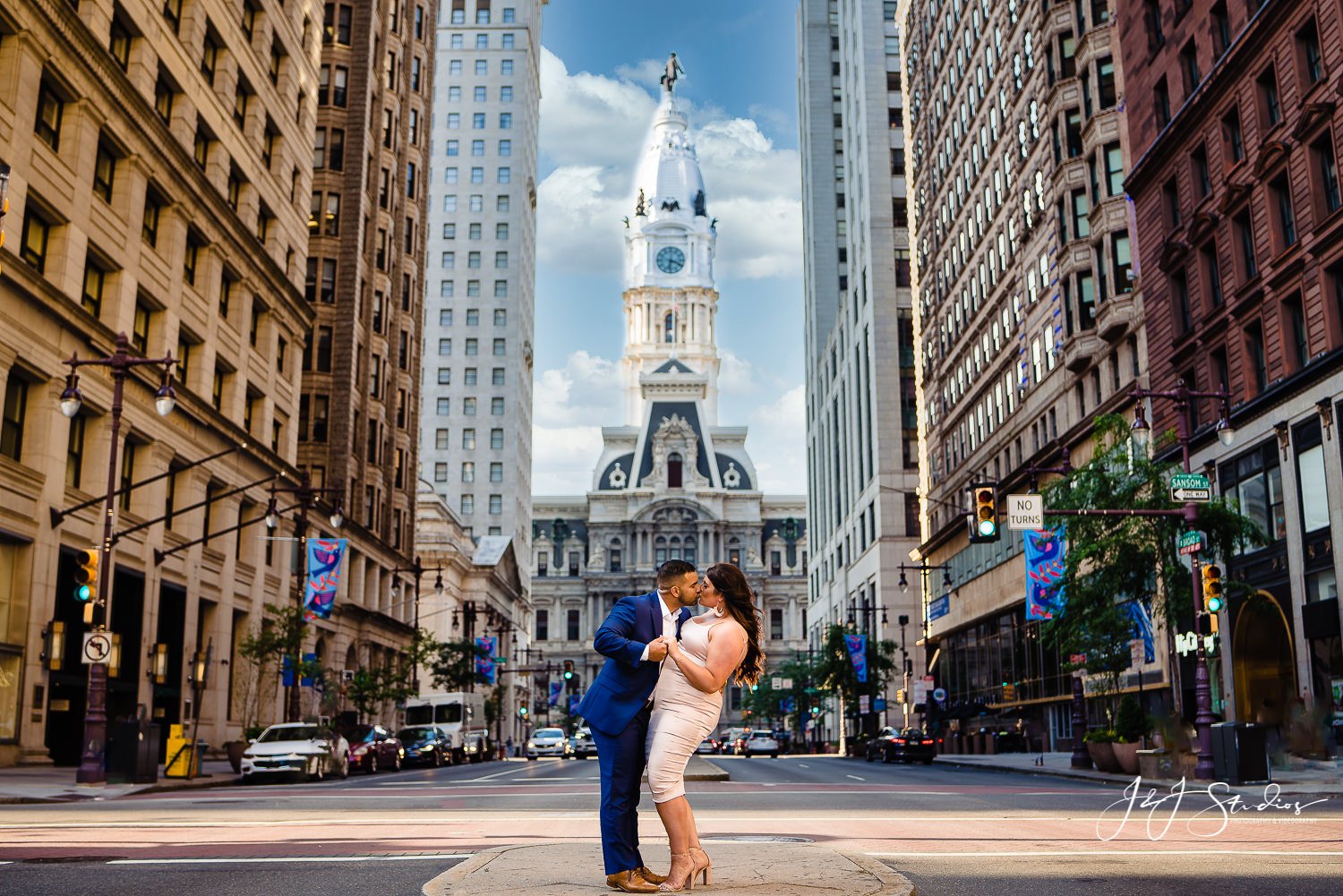 And who doesn’t love a casual stroll down the middle of the street: 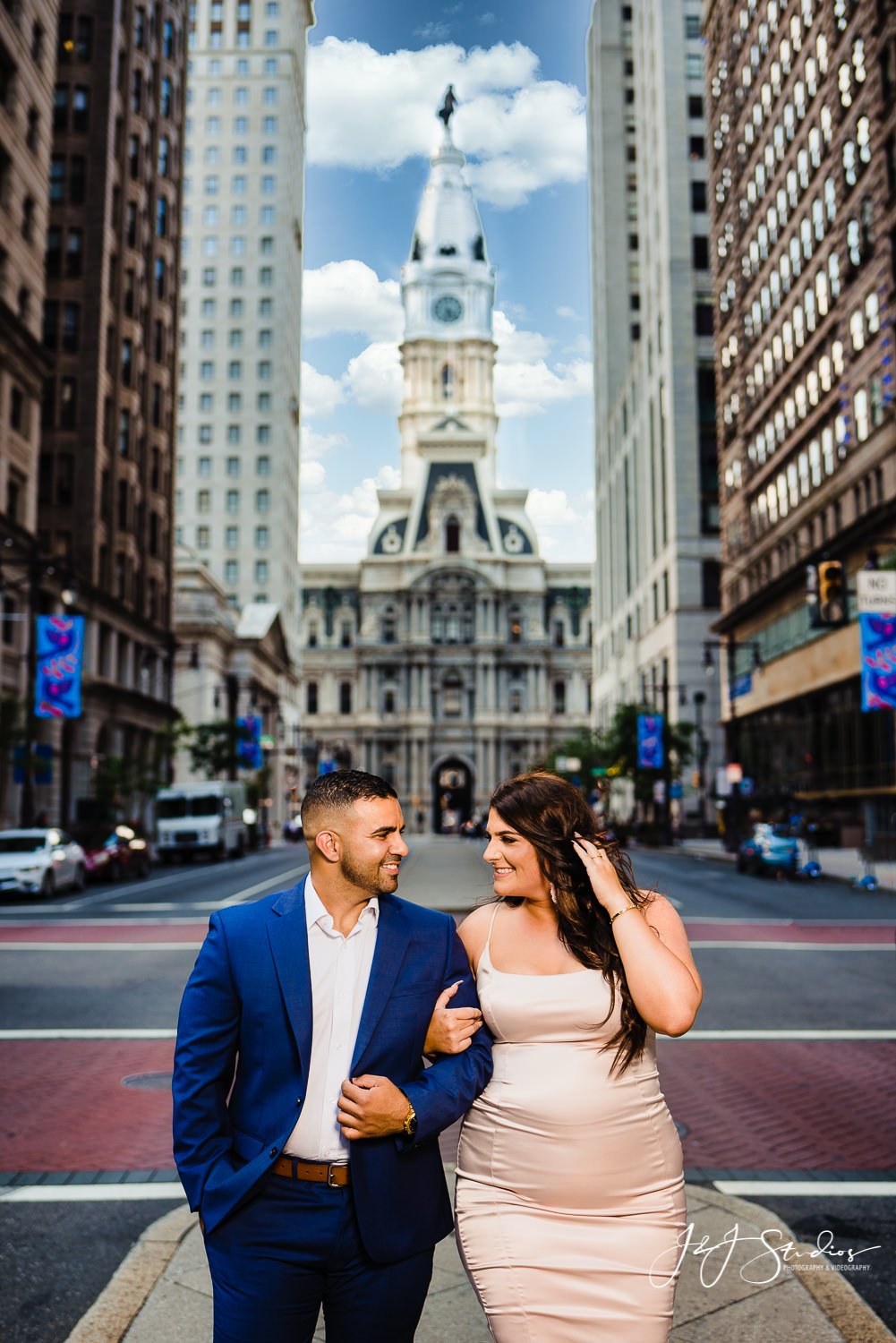 Thankfully Gemma and Steven were more than patient with me while we got these shots.  They look clean now, but the actual process of getting them is a cacophony of people walking by, hundreds of cars whizzing past (which blows Gemma’s hair out of the way), and trying not to let Denida walk too close to the edge of the meridian as cars stream by on either side.  We managed.  After the City Hall photo, we walked across the street to the Union League, because how can you pass up these stairs: 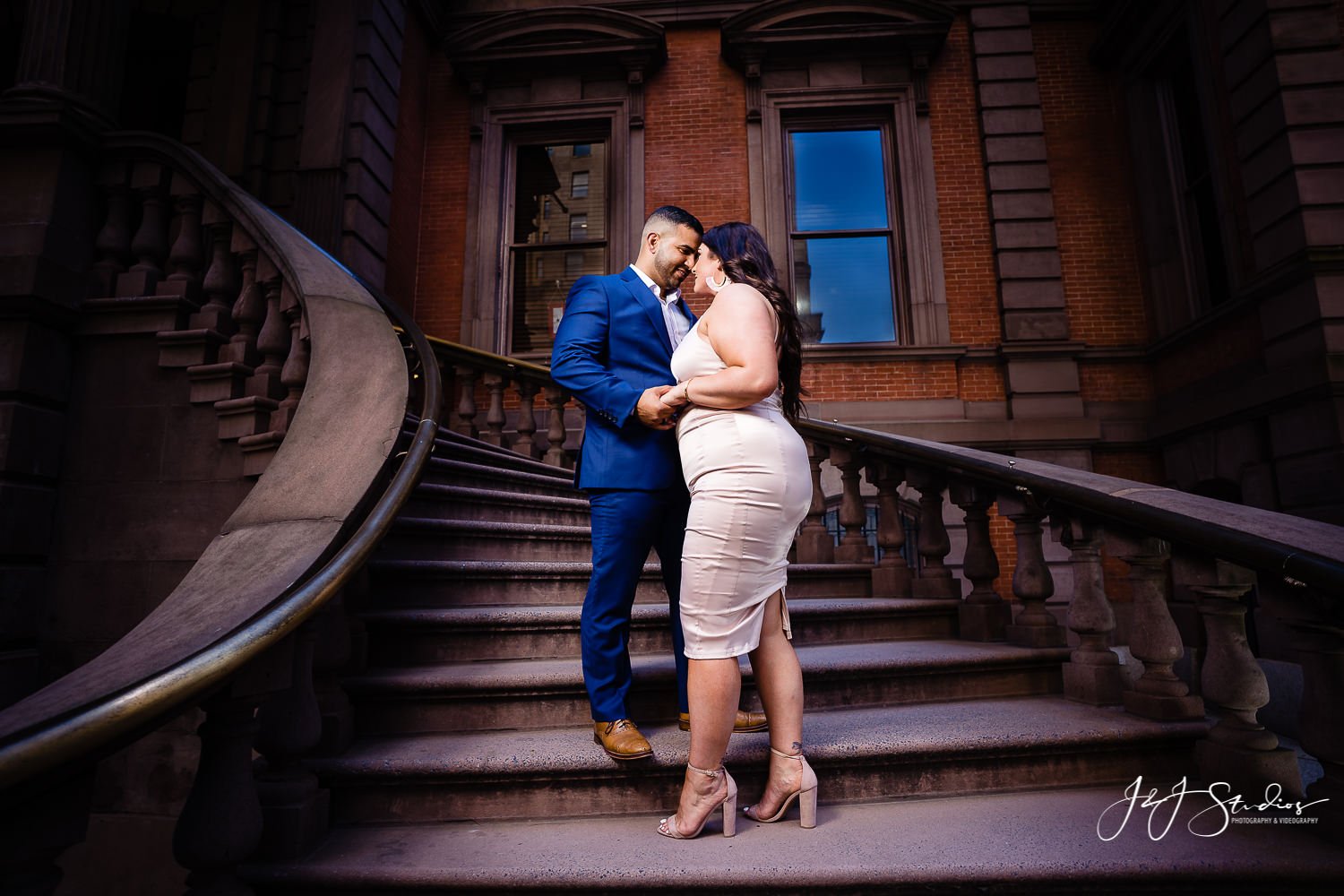 After that, we got into an Uber that may as well have been an oven.  The entire driver’s compartment was plexiglassed up (because Corona) which turned the driver’s compartment into an icebox with the rear of the vehicle being a literal furnace. Thankfully, due to the wizard-like talents of Kasey Bonk Artistry, LLC, the makeup somehow stayed on. For context, I was dripping sweat and Steven, while he pretended all was well, was sitting in a puddle of his own sweat.  We ended up in Old City for the 2nd Bank of the US and the Merchant Exchange Building. 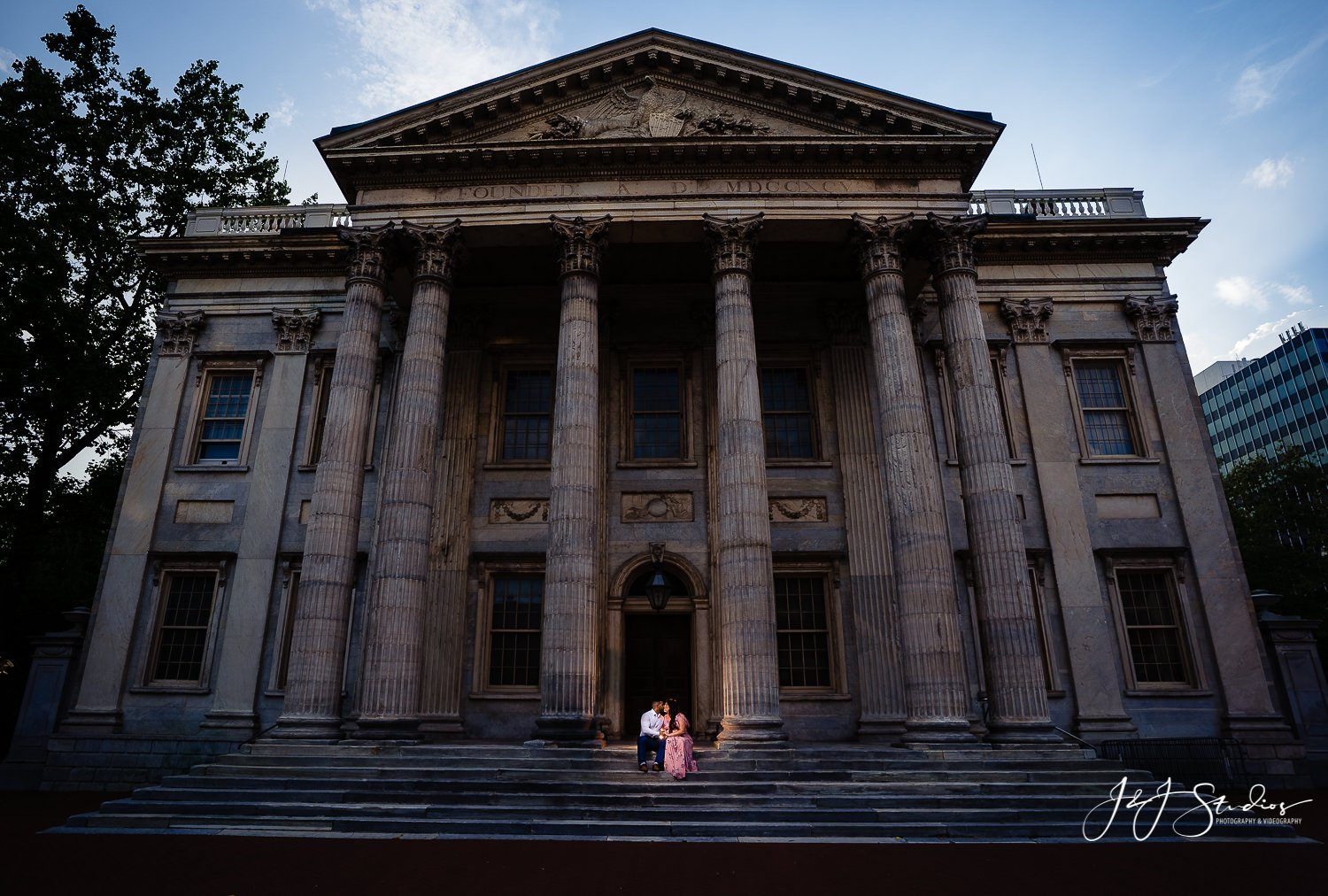 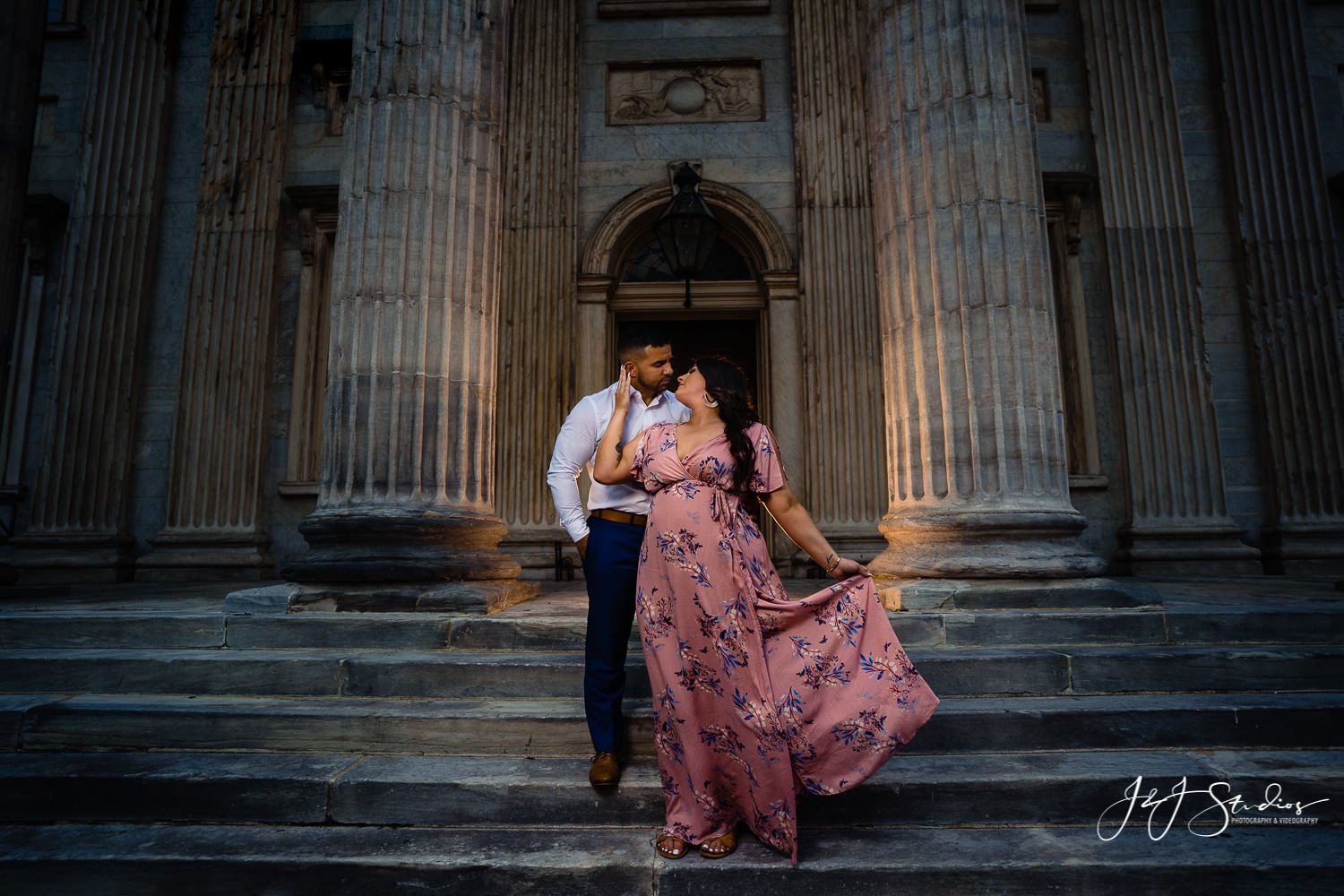 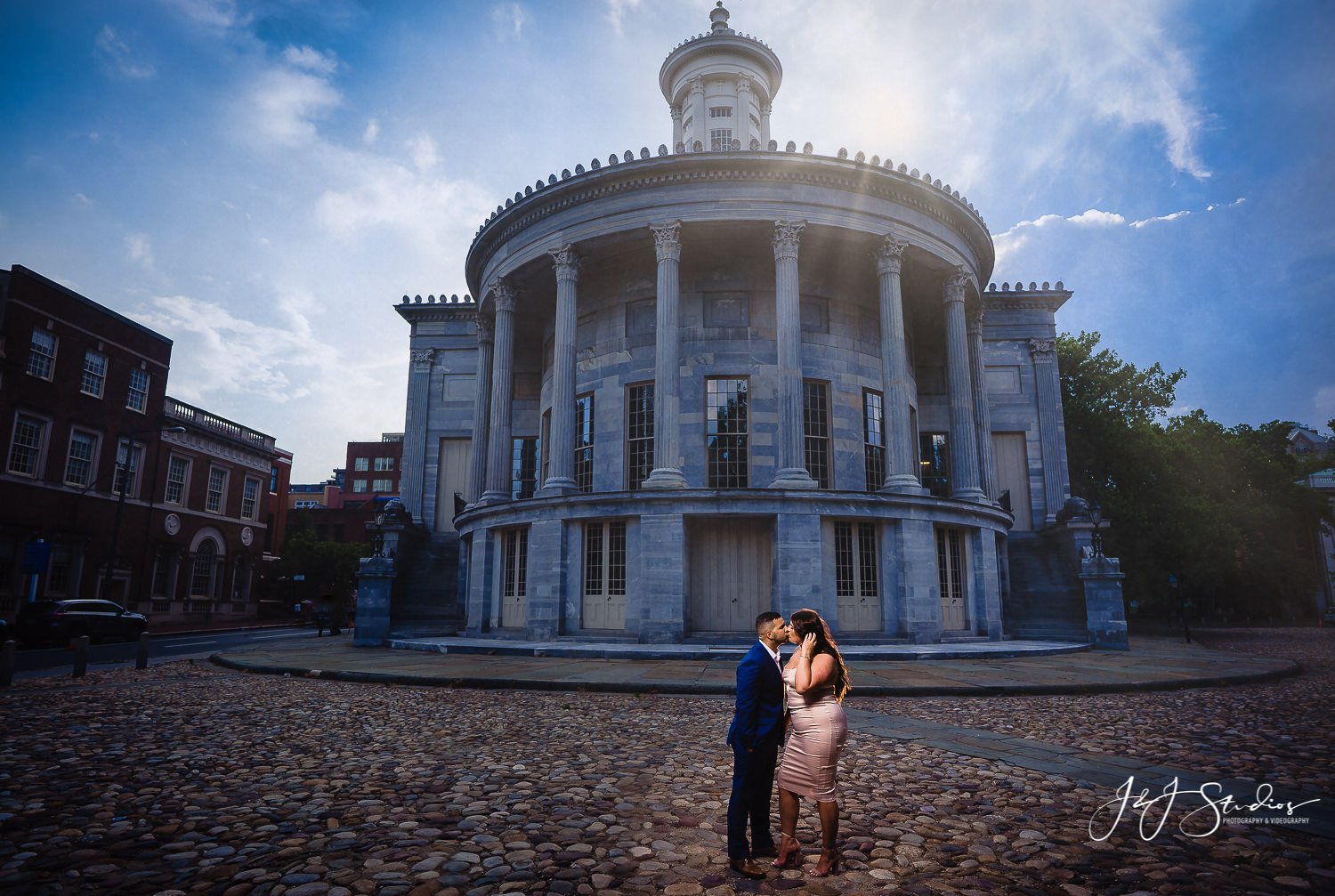 While we waited for the Uber to Race Street Pier, we did some editorial portraits of the happy couple. 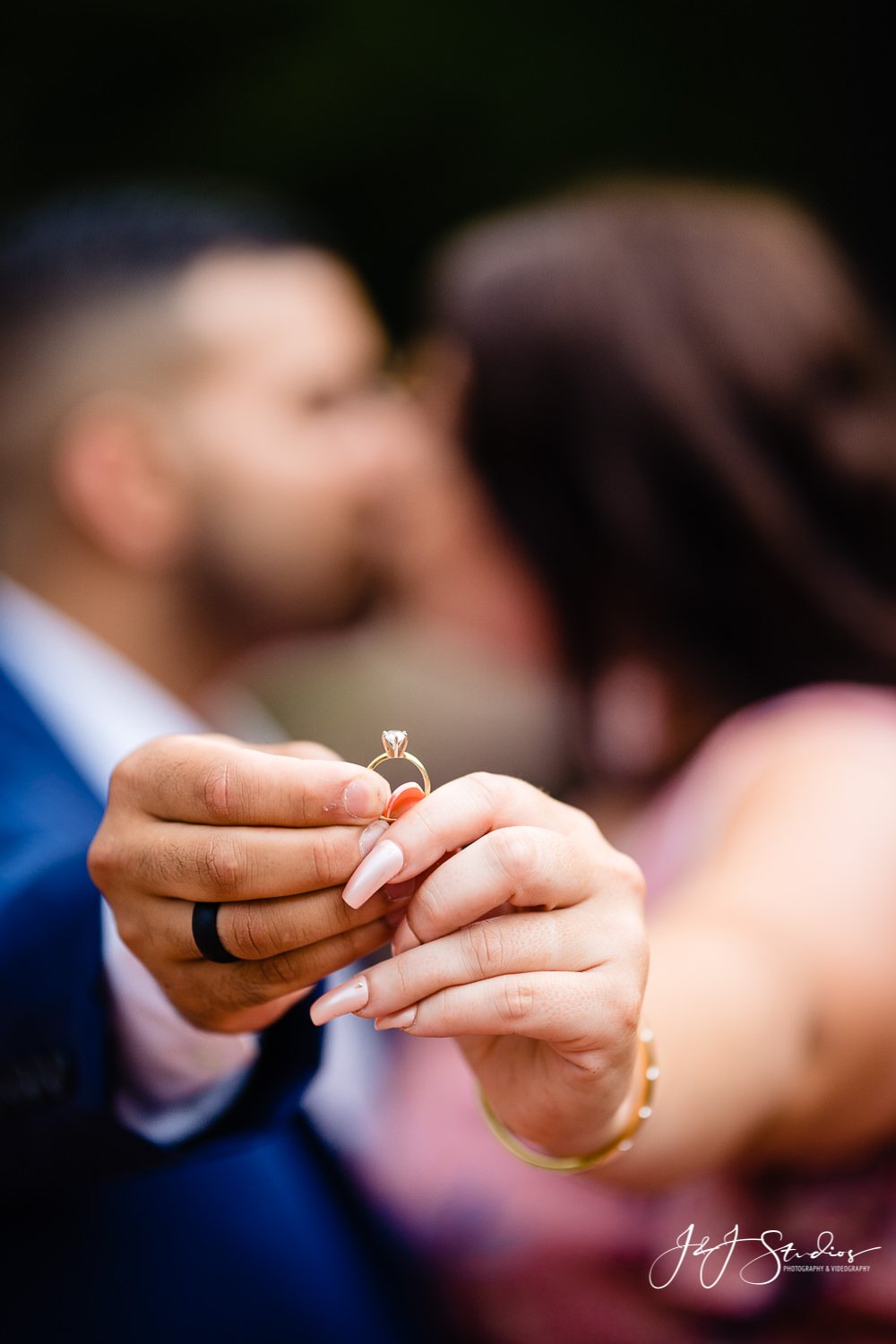 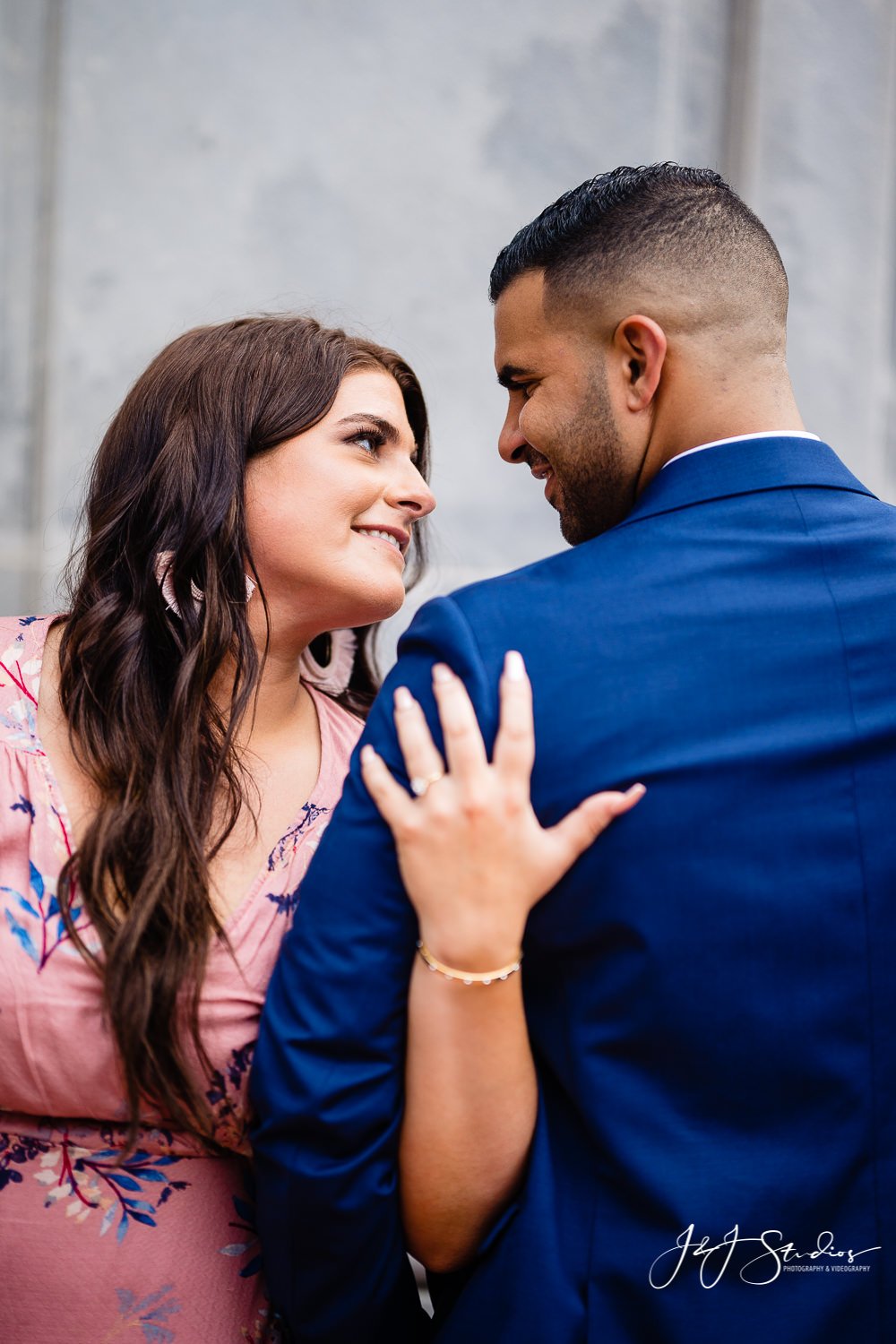 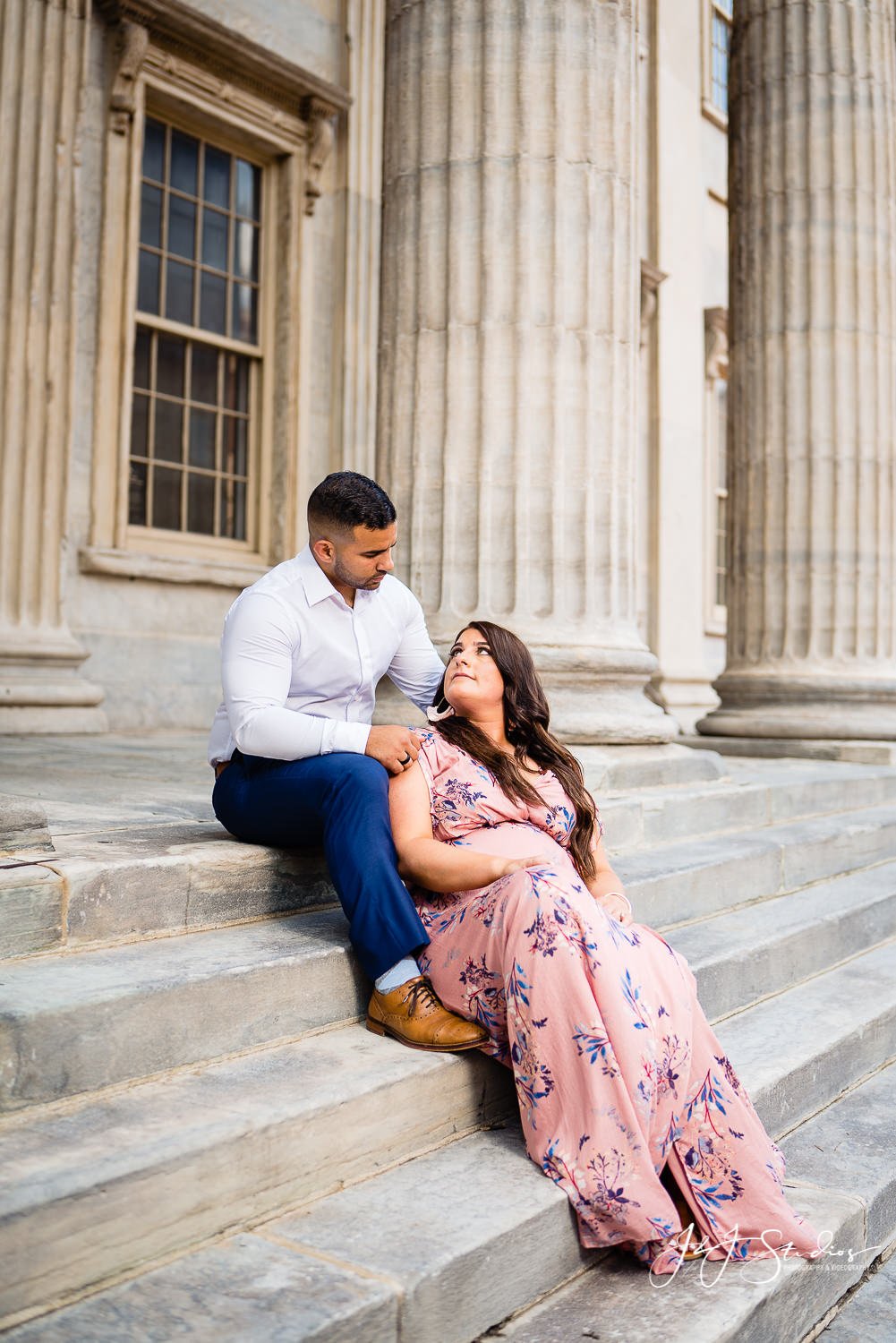 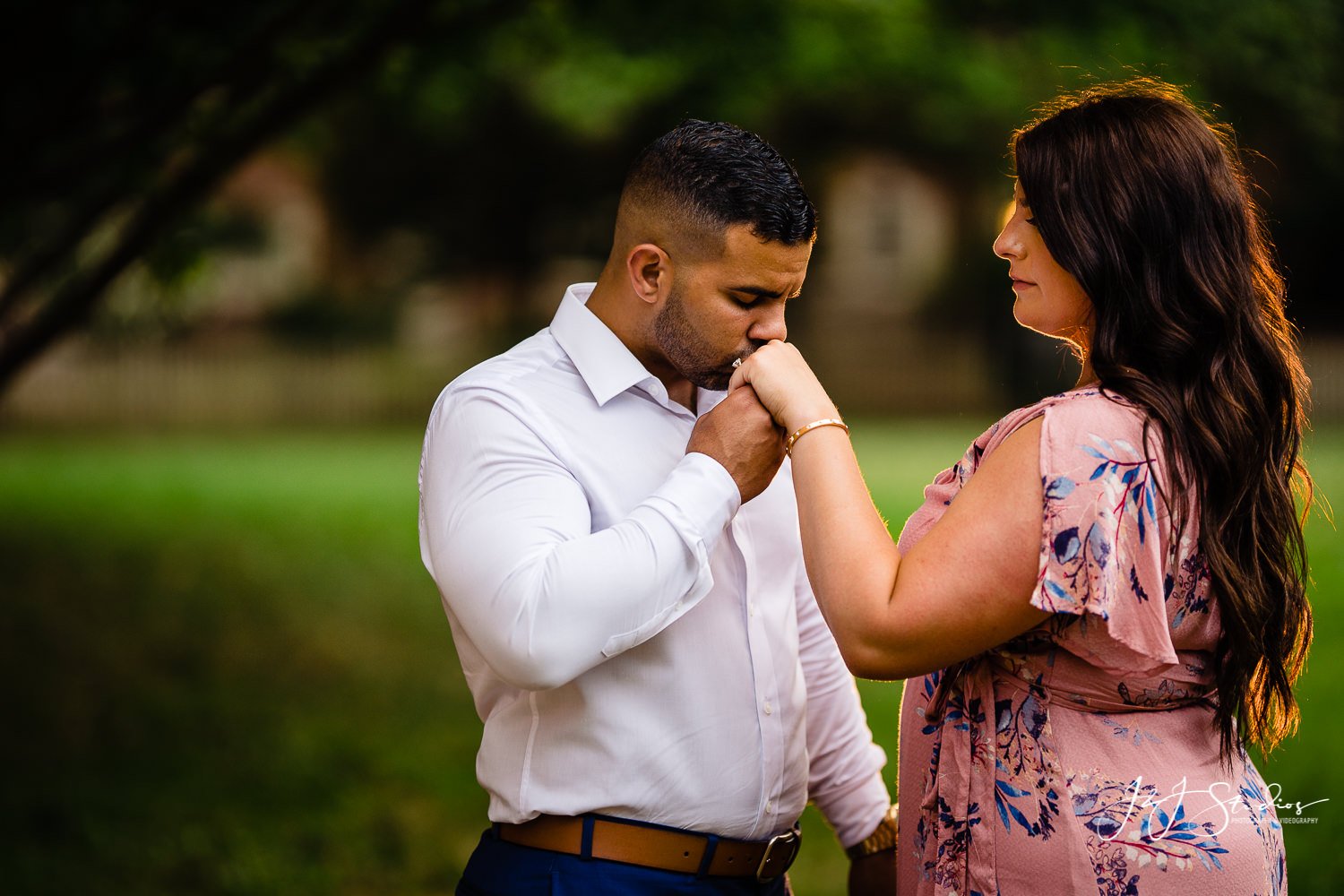 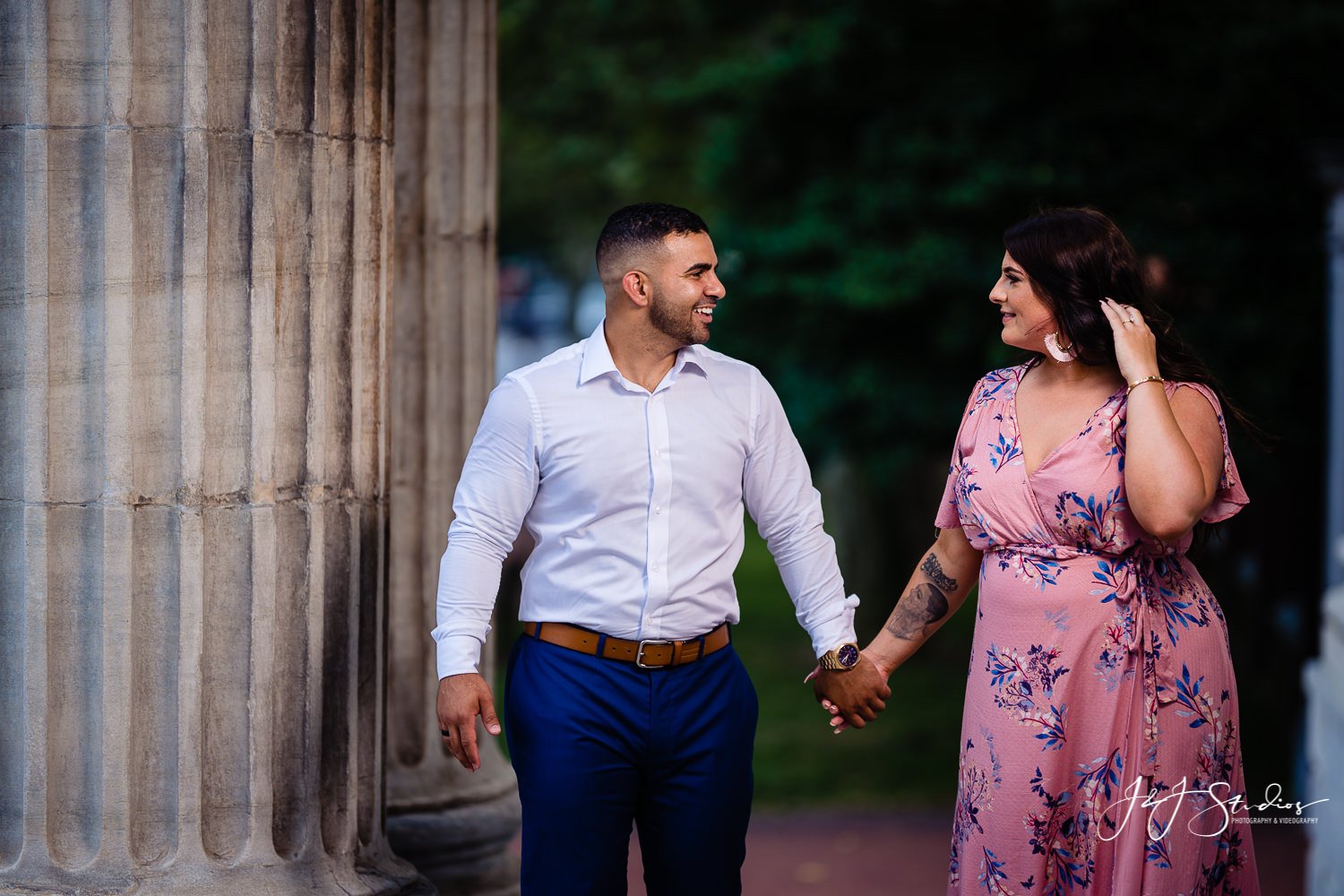 We ended at Race Street Pier with an epic bottle popping shot. 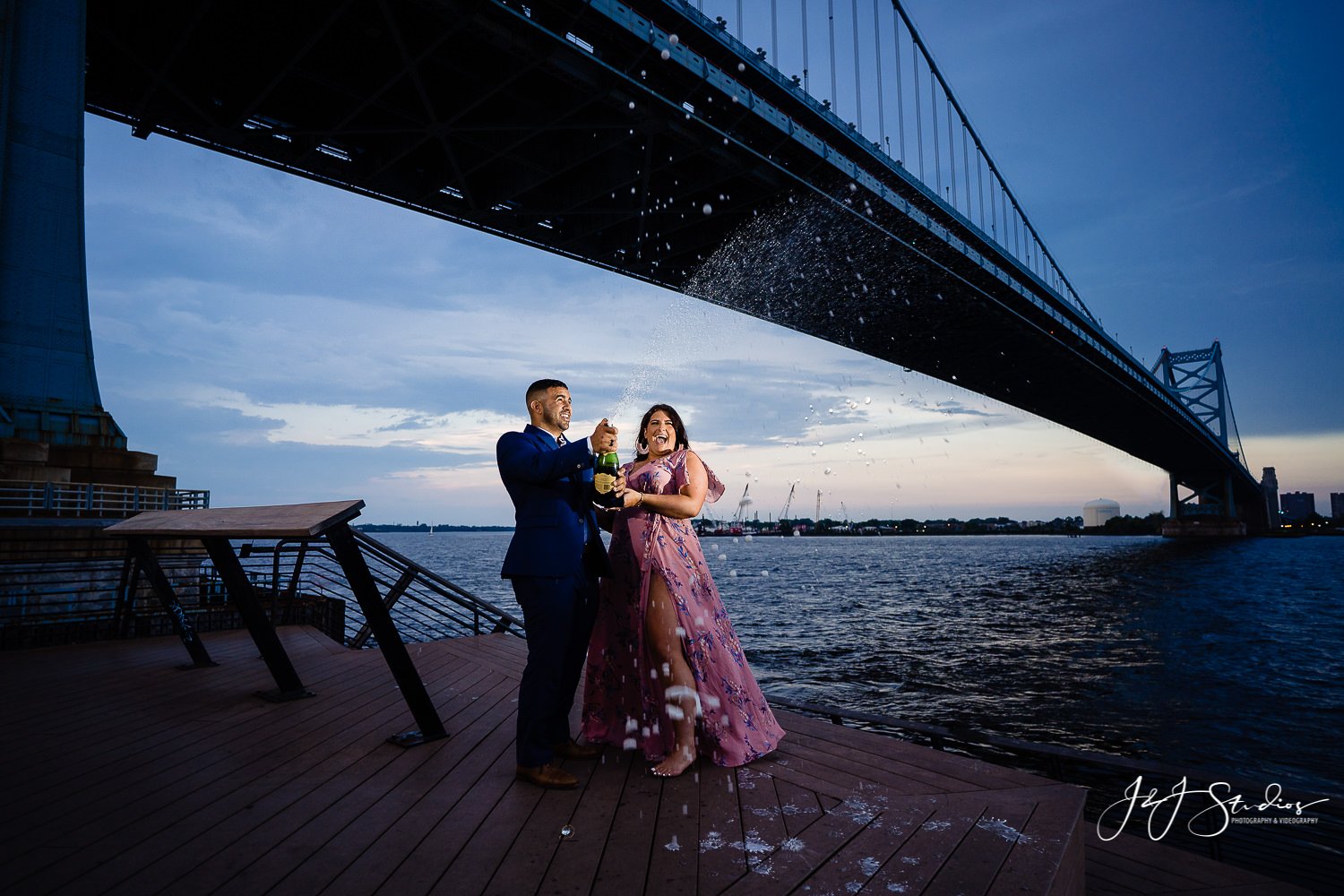 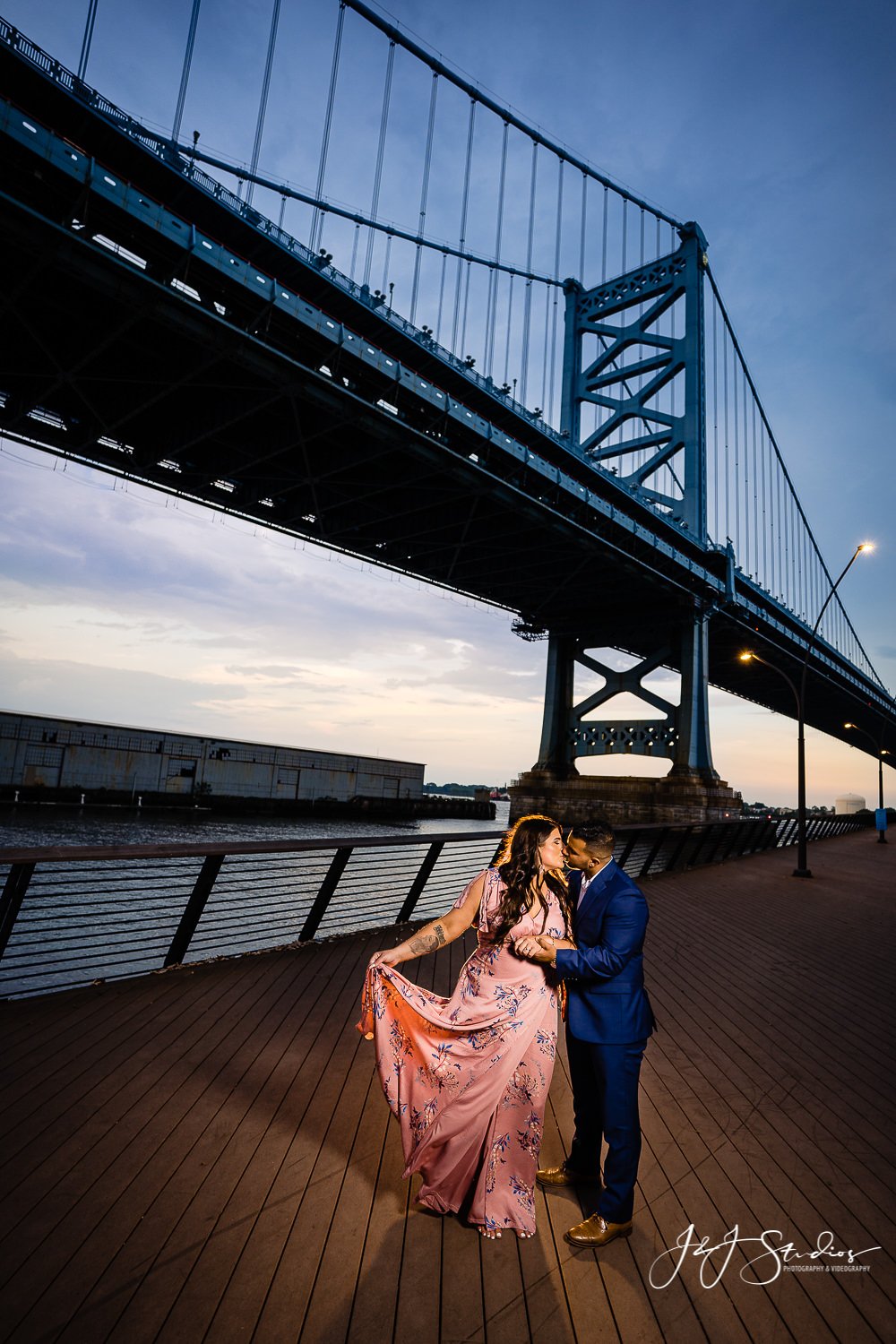 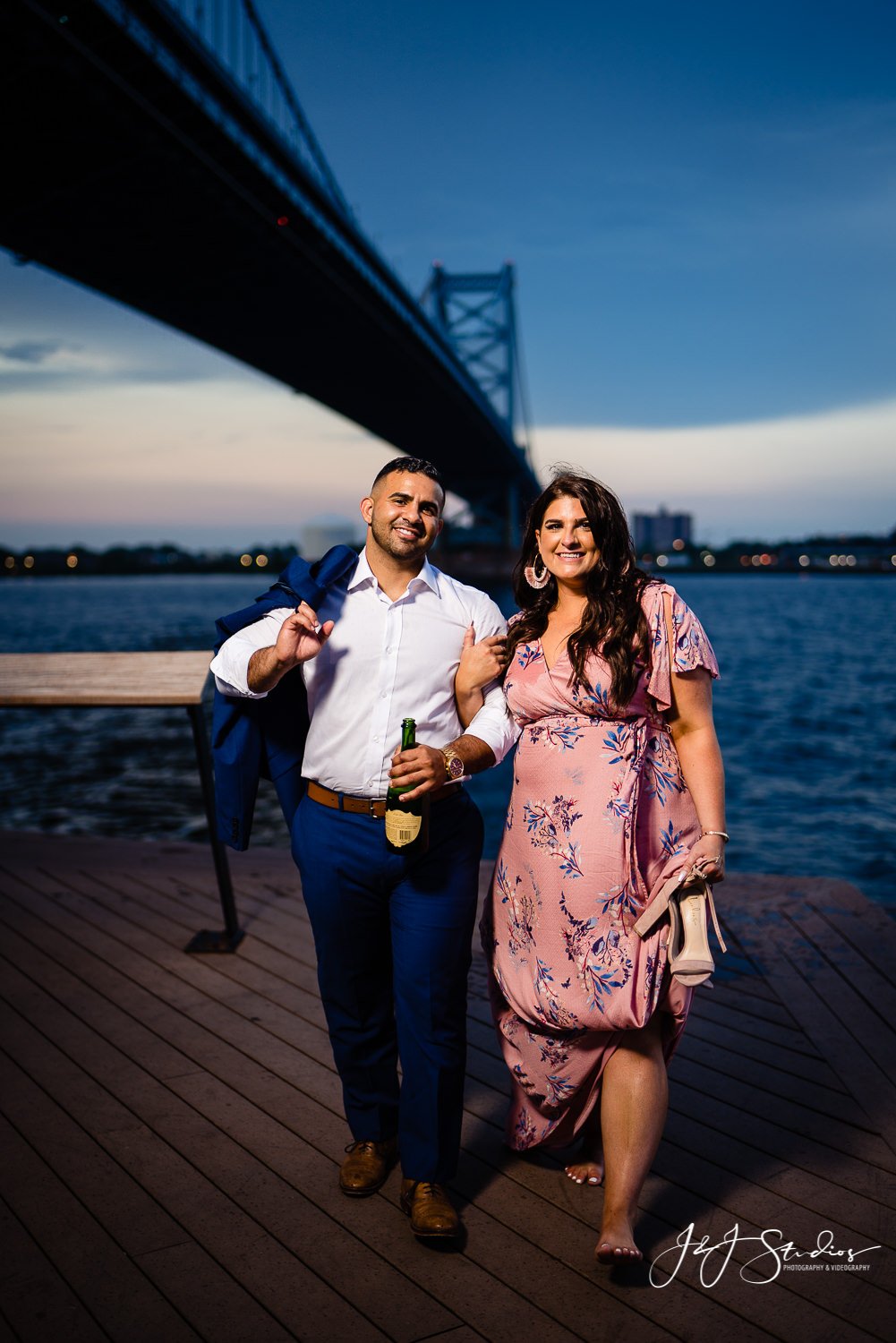 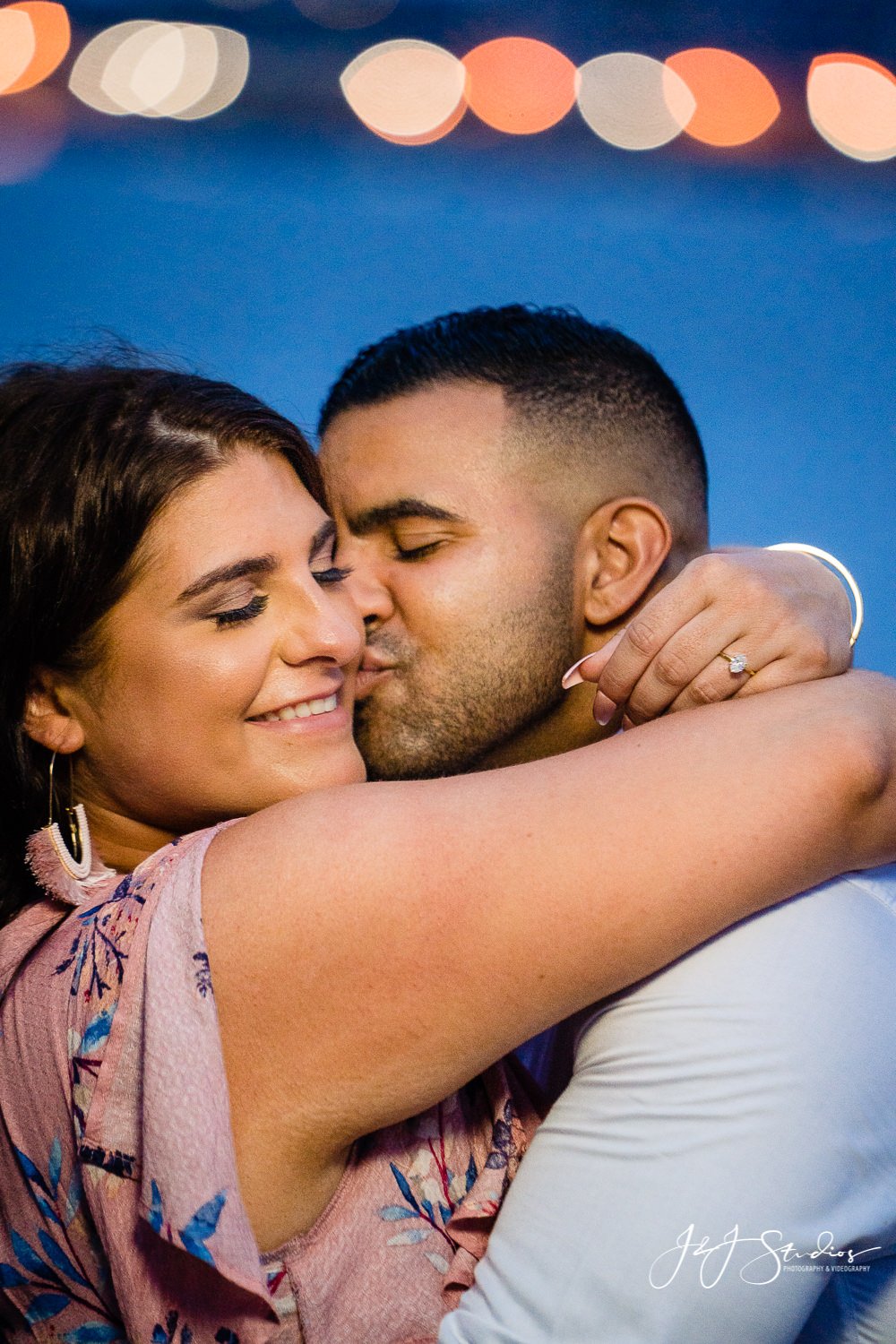 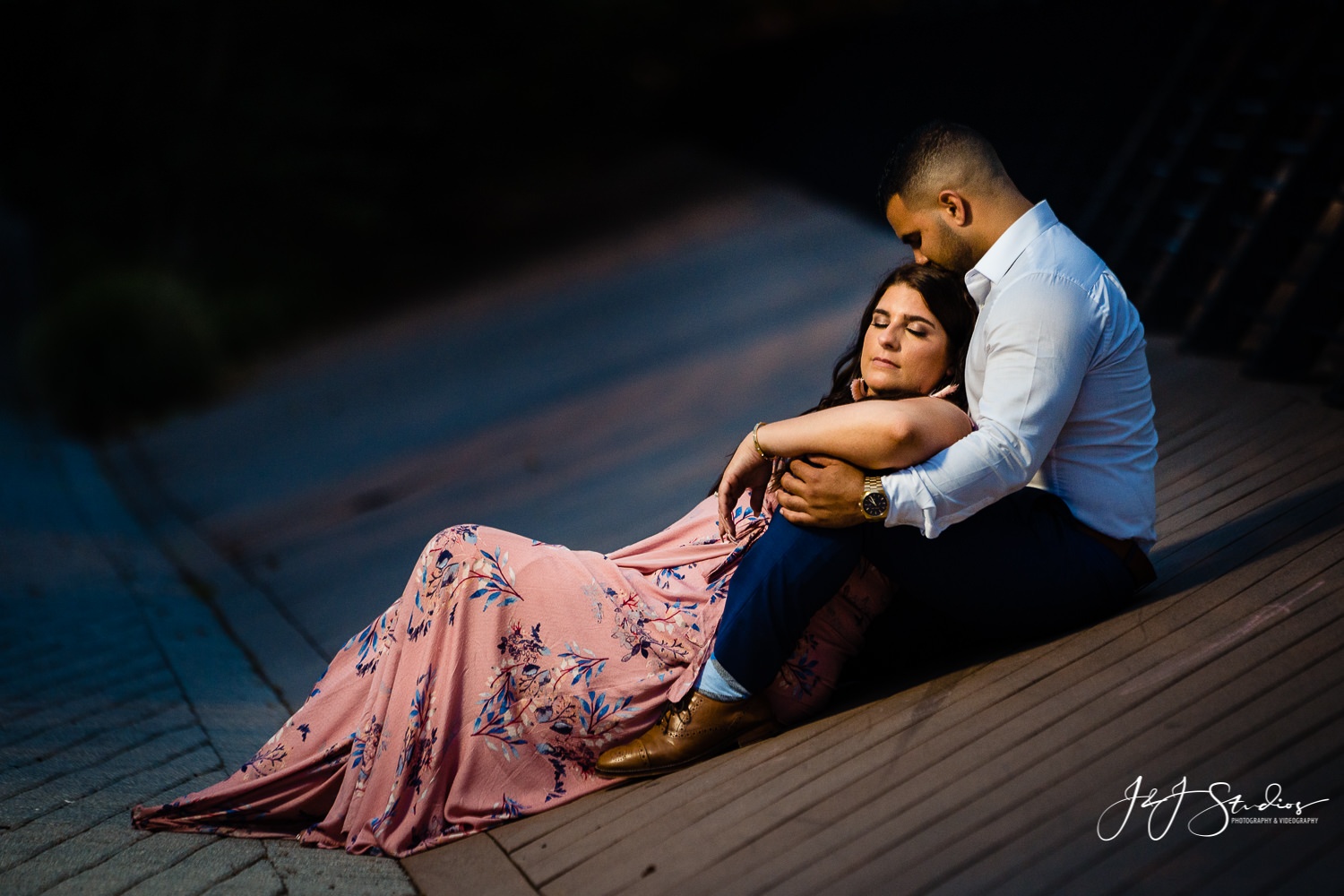 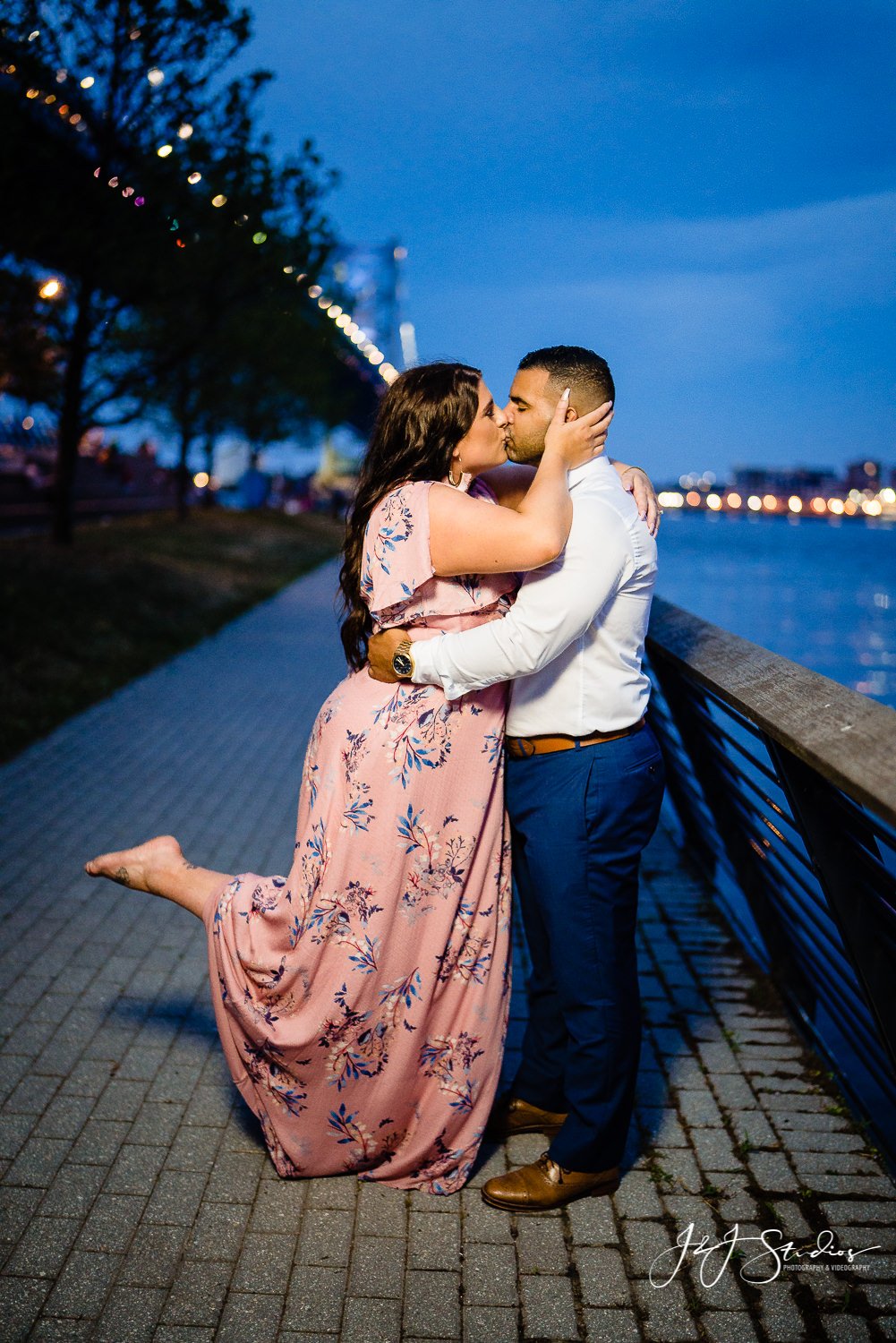 Not one to waste time, while we waited for our final Uber, we took a cool slow motion shot under the Ben Franklin Bridge: 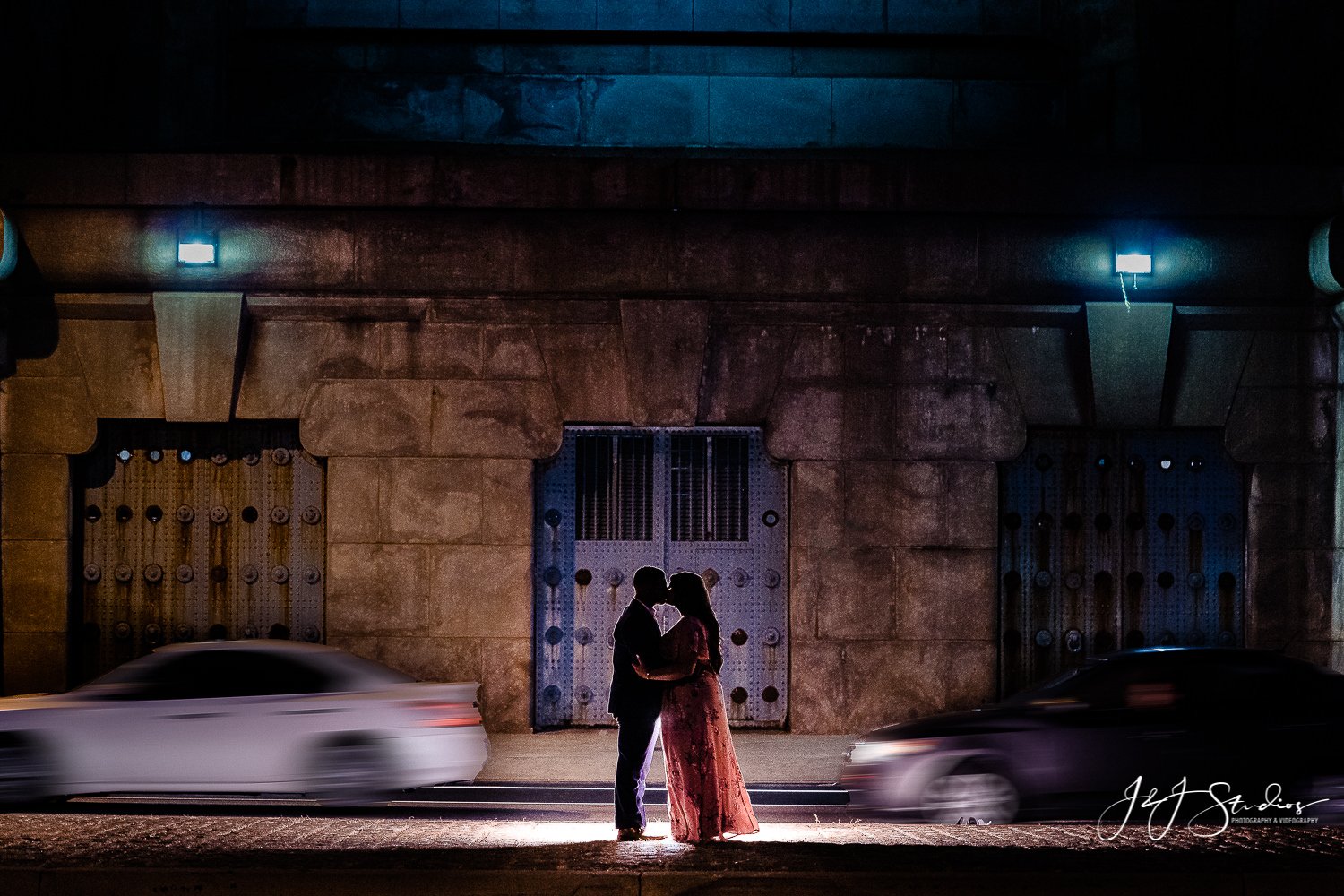 We can’t wait to celebrate with them at Lucien’s Manor in January 2021.

We met at work, where he asked to bring me coffee and I told him no, and he still did anyway. He then sent me an email saying he could only be reached by texts for appointments at work then would text me here and there and I asked him and a few friends we had in common to meet me out at the st patty’s day parade, where he came alone and we have been inseparable since March 2016.

His personality, he is very funny and kind. He would do anything for anyone let alone me. He is very dedicated to his faith, family, and friends. No matter where I am or the day I am having he always feels like home.

We went to Philly for a ‘friends birthday’ to Christmas village, Steven had been planning to propose since October and on December 5th my mom may or may not have slipped and ruined the surprise a little but December 7th was still the best day of my life when he proposed in front of the big Christmas tree in front of friends and family and we came home to more friends and family, food and a decorated for the occasion house!

A mix of Pinterest, our photographer’s work. We knew we definitely wanted a city setting. We originally planned for New York in Brooklyn, then when coronavirus hit we were going to do Washington DC, but corona lingered around and we decided Philly was the best route, even in 95-degree weather!

We have! It has been okay so far! We started quickly after we were engaged to make sure that we got the venue and vendors we wanted!

It was AMAZING, it was VERY hot the day of our engagement photos, some of the city was shut down and it was supposed to rain. John and Denida were AMAZING ! From the posing to never missing an opportunity to take a photo. John has a very creative outlook and took pictures down to the last minute! He was very funny and interactive and we had an awesome time. 6 hours after our shoot we already had some pictures and they are AMAZING! Friends and family, as well as us, are dying to see more!

Gemma: I am very creative, I can see things and turn them into something else. Once my mind is set to something I have to do it. I love funky socks, Steven makes fun of me because I call sneakers “tennis shoes.”

About the Author: John Ryan is an award-winning wedding, portrait, and event photographer photographing 25-30 weddings each year. Based in Philadelphia; available for travel worldwide.

We had male model @rickycardorics out looking dapp

Gemma + Steven. You made a 95F sweaty mess of a sh

Senior shoot day here at J&J Studios. We are featu

Thanks for coming out today @alexa_eden_mod. You r

Me & You Together . . #phillyengagementphotos #wed

Congratulations Gemma + Steve. For a shoot that wa

Commemorate your senior year. We were so happy to

Avisha said yes to Hiren, the man of her dreams an

Taylor and Danny decided on an outdoorsy engagemen

Congratulations Cladia + Khalif on your engagement

Darina + Elias met through a mutual friend. While

Robbi Rocked her last photo shoot with us at Lower

Congratulations Kayla! You have so much to look fo

Next Post (n) Advice From A Philadelphia Senior Photographer