One of my favorite parts about being a Philly proposal photographer is crossing paths with extraordinary people and getting to know them. Especially at engagement shoots, that’s when I build an everlasting friendship and connection with couples. I was humbled when asked to photograph a Philadelphia proposal – a surprise one at that. The University of Pennsylvania proposal will forever be engraved in Hiren Patel and Avisha Shah’s memories.

Fate happened for Hiren and Avisha when the two met in college. One look and the rest was history. The two fell head over heels in love and found themselves talking about what the future holds for them. In the near horizon, they clearly saw themselves spending the rest of their lives happily together. 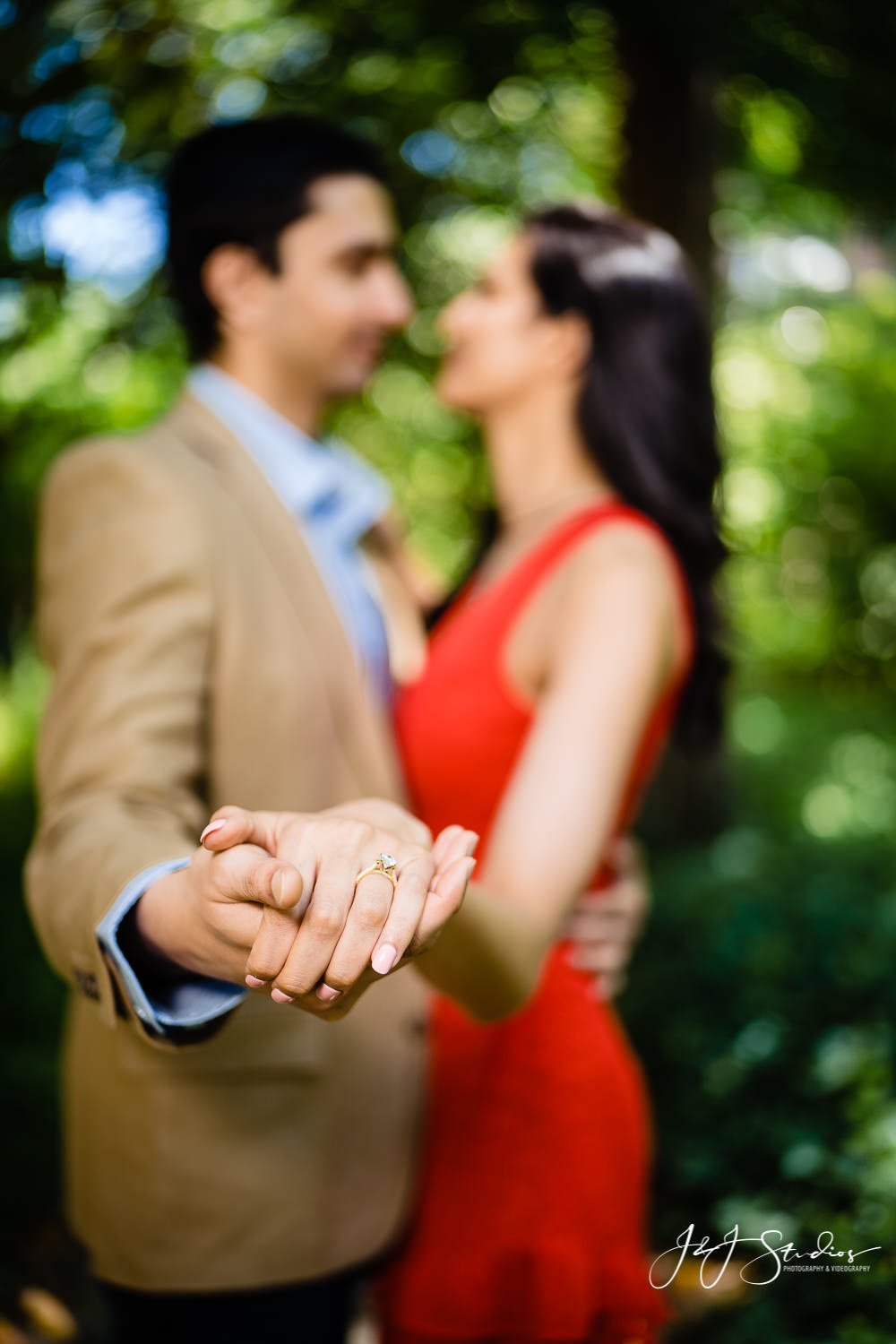 A Secret Proposal At The University Of Pennsylvania

On June 14, 2020, Hiren decided it was time to make this proposal happen. With thorough planning, he definitely had a few tricks up his sleeve to keep help secret on the down-low. Since they currently reside in New York, his plan of action was to convince Avisha that he had a meeting in Philadelphia. So, they made the drive over to where it all began.

As a matter of fact, The University of Pennsylvania offers endless spots to choose from for photos! Not to mention, the park nearby offers elegance and simplicity for any grand Philadelphia proposal. This park follows the saying, “It was a walk through the park,” as this versatile place was serene and helped make the engagement photos look marvelous. The tranquil pond here offers a wonderful proposal spot with its rippling waters and the greenery directly in the background. 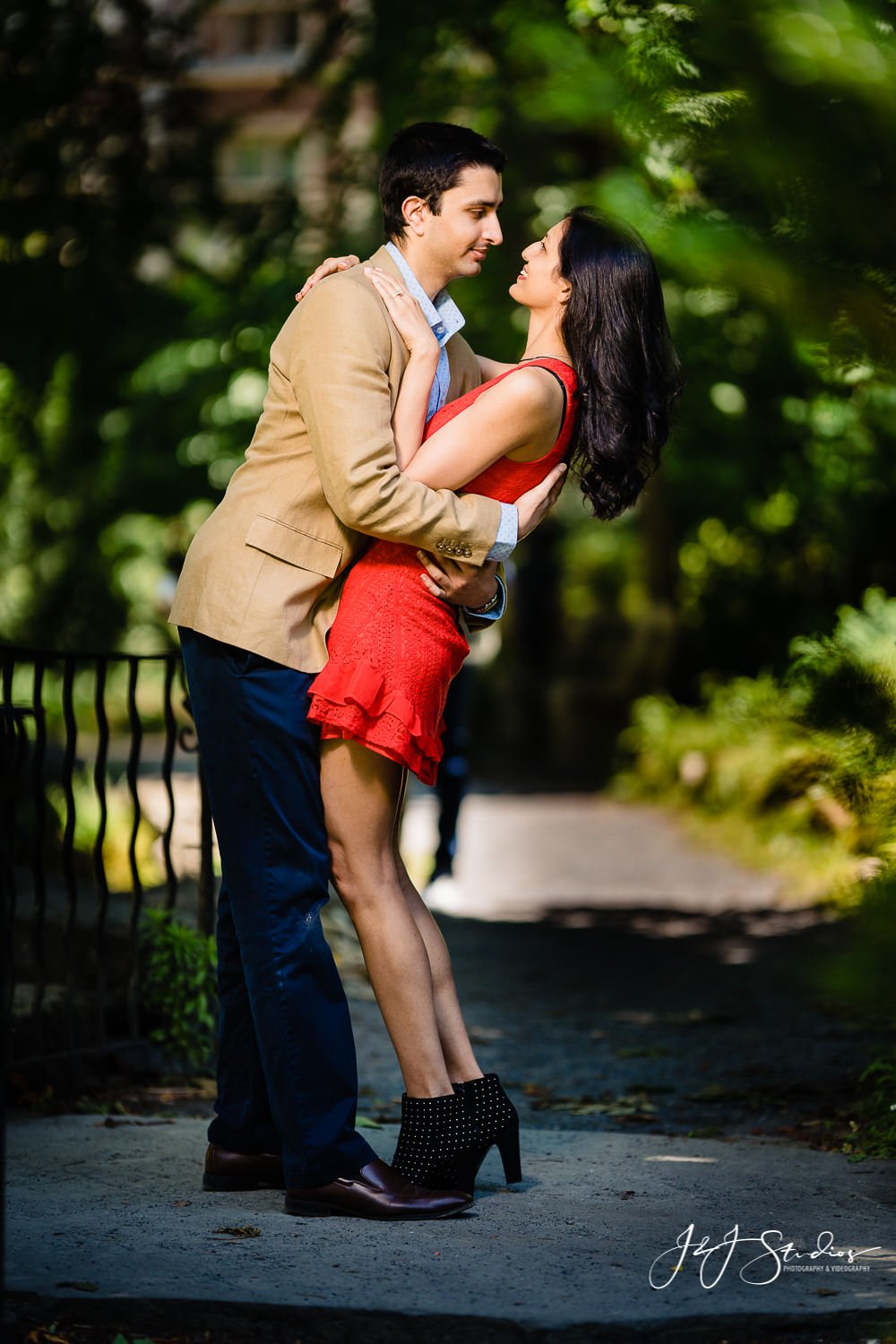 Upon their arrival to the location, Hiren informed Avisha that he would be right back, for her to wait in the car, and that he was simply picking up a few things. In reality, this was when he met up with me to pinpoint the exact location of where he would propose at the park located at The University of Pennsylvania. I was prepared and early, with my equipment ready-to-go. It was showtime. This park holds a touching history for the two, and was where he first asked her to be his girlfriend – oh, the irony that was set to unfold! 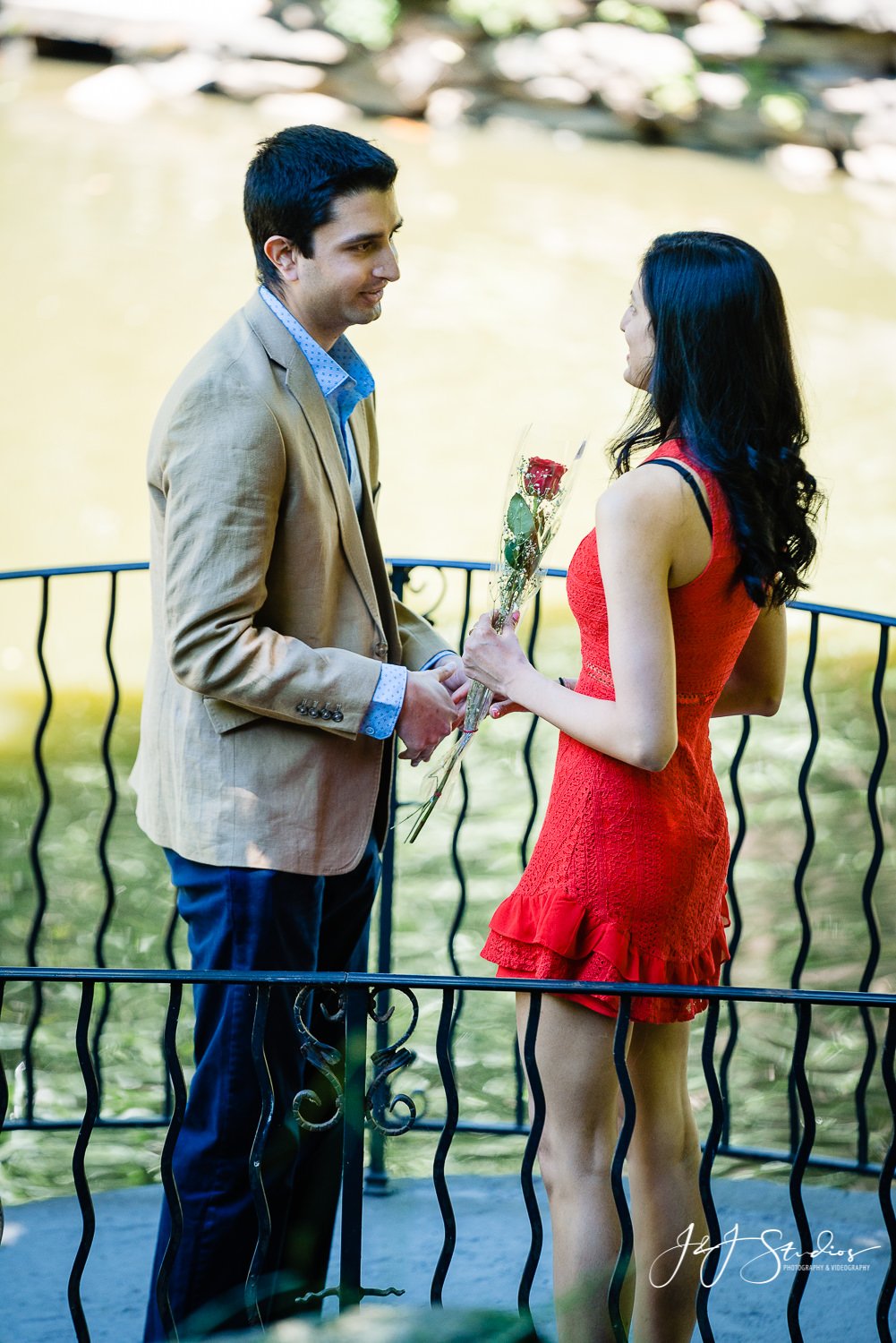 The clock began ticking and you could see Hiren’s nerves building. Furthermore, Avisha had no idea that the moments ahead were about to change their lives. Quickly approaching was 1:00 p.m., the time he had in mind to get down on one knee. He went back to where he parked closeby and asked if she could help him bring a few things back to the car. As they walked back, he led her through the park towards a quiet bridge and pond. The seconds were dwindling down, and the big surprise was soon to unfold. 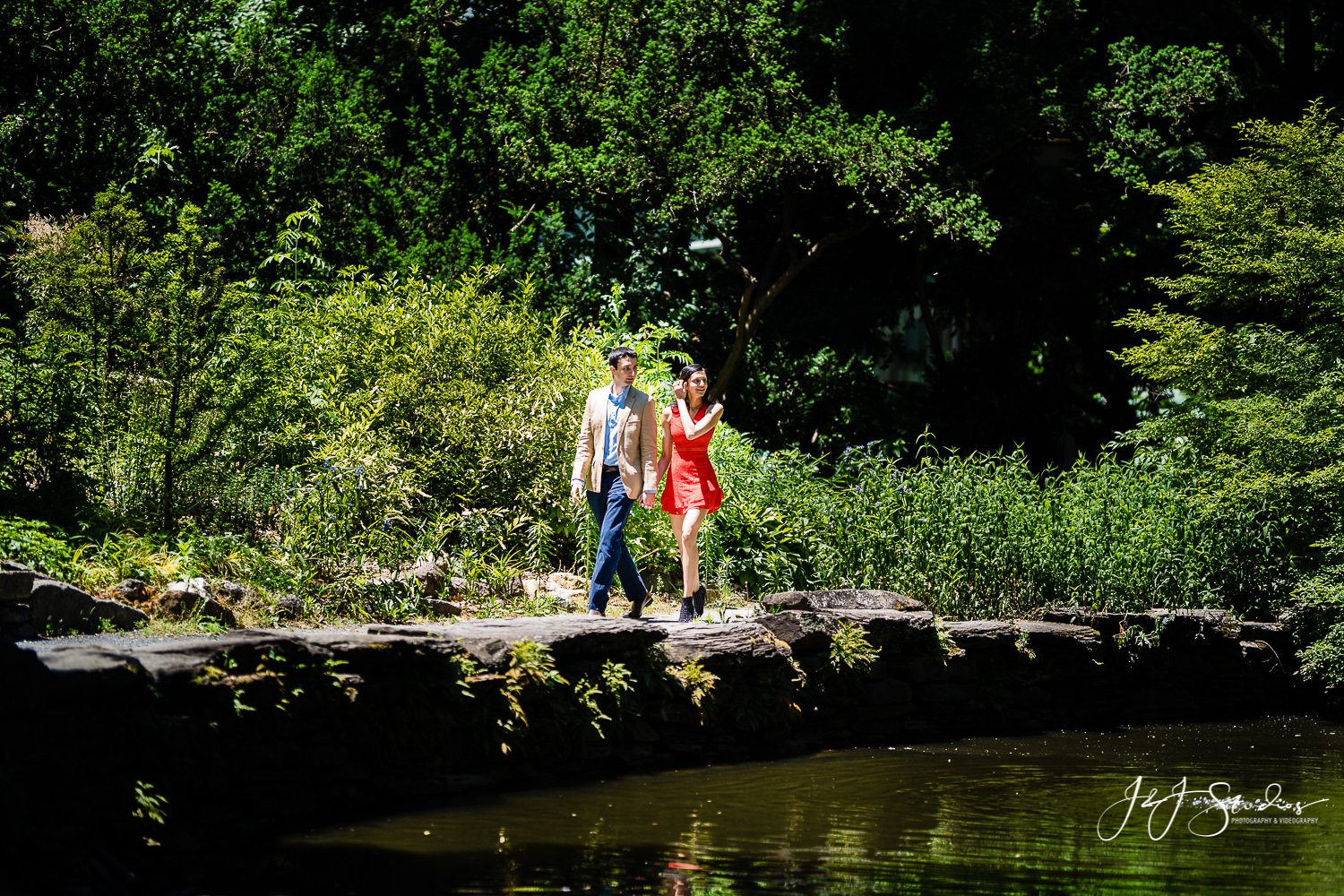 The mood was set when Hiren reached for a rose he placed there earlier and presented it to Avisha. He knelt down on his knee, popped out the ring, and looked into her eyes to ask the big question – her face and smile said it all. She was overjoyed with excitement and quickly said yes to their happily ever after. Their smiles were contagious, and the whole entire atmosphere was a dream come true. They embraced their love and fell deep into the moment, ultimately creating effortless and perfect images. 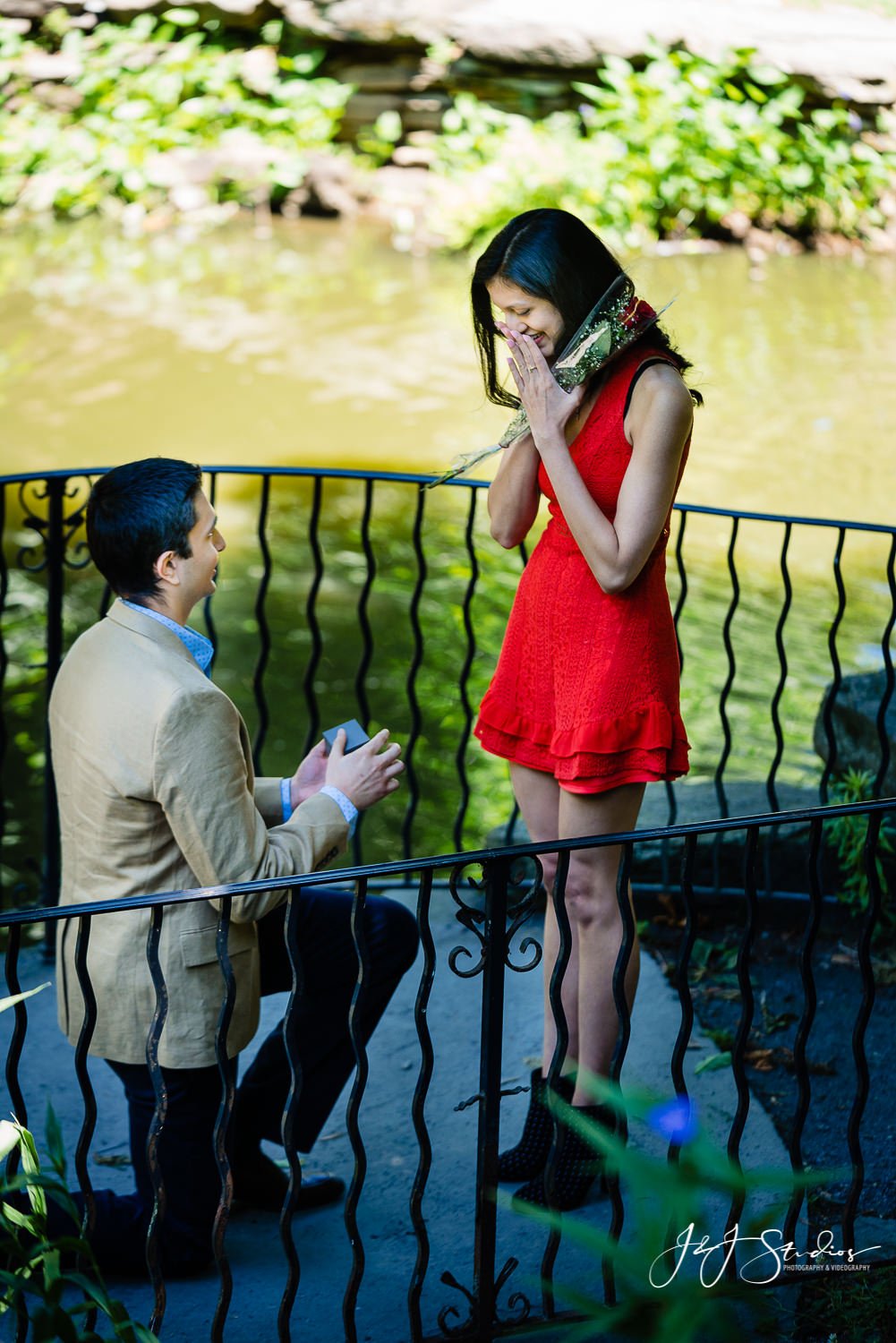 To summarize, we wrapped the day up with post-proposal shots. The lighting was spot-on, and as you can see, they are quite smitten. They both looked great in their attire, and the dazzling ring was the icing on the cake. As their Philly proposal photographer, I could sense the love these two share for each other is genuine and true. These two are ready to begin wedding planning and begin the start to their forever. It was an honor to be a part of their special day, and I can’t wait to see where the future takes them. 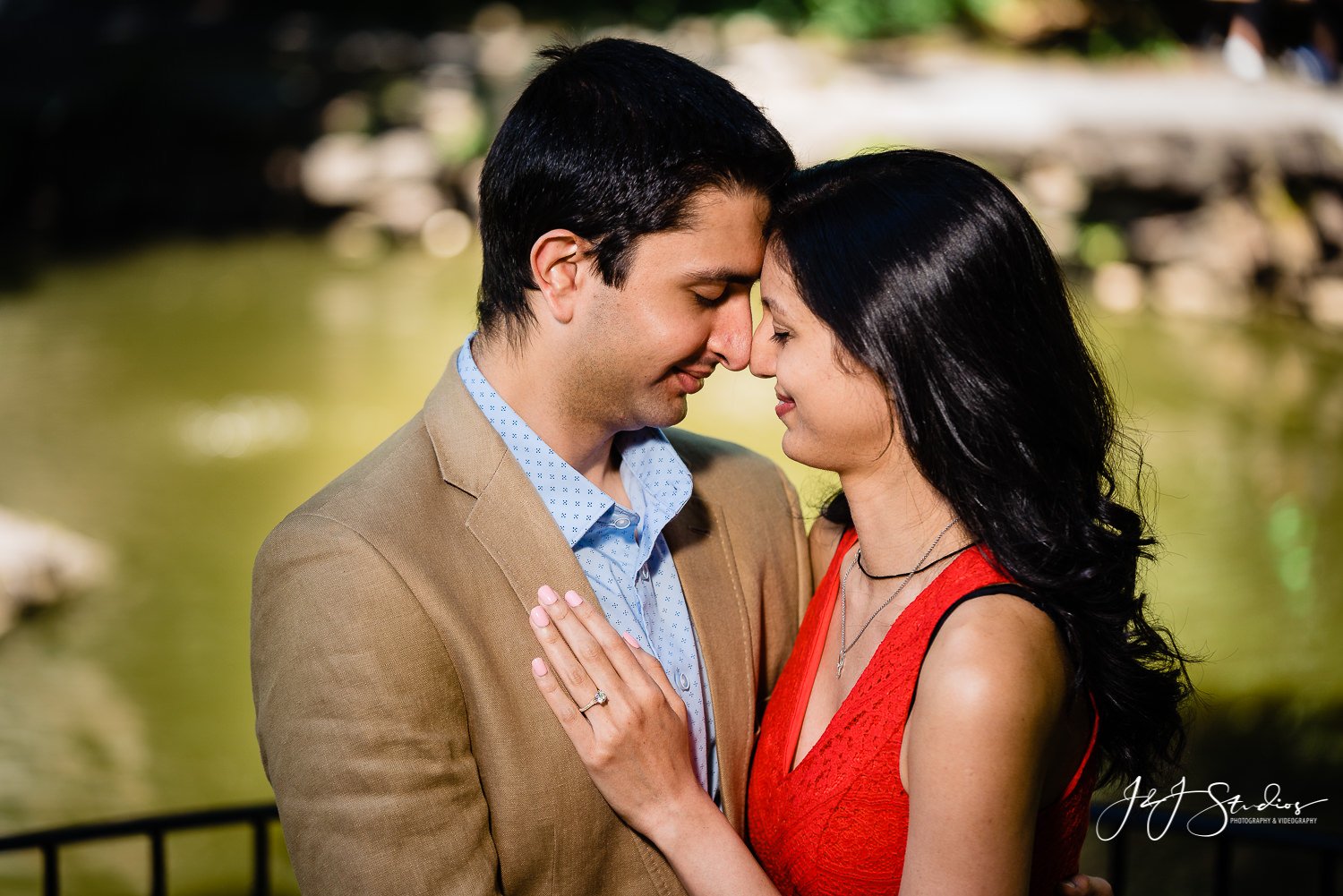 Want Your Proposal To Be A Surprise?

If you are ready to pop the big question and surprise your significant other, reach out to me, and I will be your Philly proposal photographer! Above all, I am a sucker for a good love story and will cheer you on the entire time. If you want your own University of Pennsylvania proposal, feel free to reach out to me and we can discuss details

Make sure this account has posts available on instagram.com.