Are you planning an engagement session in Philadelphia?  Choosing a place for an engagement session can be a daunting task. Some people like city parks or urban architecture while other people like plants and trees. Luckily, Philadelphia has a wide range of locations available for beautiful engagement pictures. Wissahickon Creek is most famous for its 50 miles of rugged trails carved through the distinct Wissahickon schist bedrock.  You will see in some of the pictures below examples of the beautiful rock formations and how we incorporated them into the couple’s engagement pictures.

The Wissahickon Valley is first known as the tribal place of the Lenni Lenape.  During the 1800s, various mills were established along its banks during the Industrial Revolution. Now, Fairmount Park owns 1800 acres in the Wissahickon Valley which preserves the purity of the city’s water supply.  Wissahickon Creek means stream of yellow color or catfish creek in the Lenape language.

One prominent first of the area was the establishment of the first paper mill in America on Monoshone Creek, a tributary to the Wissahickon in 1690.  Philadelphia continued to be the nation’s primary papermaking area through the early 19th century.

Some popular landmarks include the Covered Bridge, Cedars House, Climber’s Rock, and Devil’s Pool. Devil’s Pool, near the mouth of the Cresheim Creek, is a popular area for swimming and lounging, however, it is not legal due to high levels of pollutants in the water. During our shoot, we explored the lands and features near the Forbidden Drive Upper Parking Lot, which provides easy roadside access and a paved parking lot for visitors. Cavit emptor, make sure to have some sturdy walking shoes for the shoot itself and some bug spray will be helpful in keeping the mosquitos away. Also, the area is known for ticks so be sure to shower and check for ticks when you get home. Finally, be prepared to possibly get wet during the shoot. Yes, as you will see, some of the shots from today were literally taken in the middle of the creek.  One misstep and you may be ankle-deep in water.

Without further ado, I give you the Wissahickon Creek Engagement Shoot of Taylor and Danny. 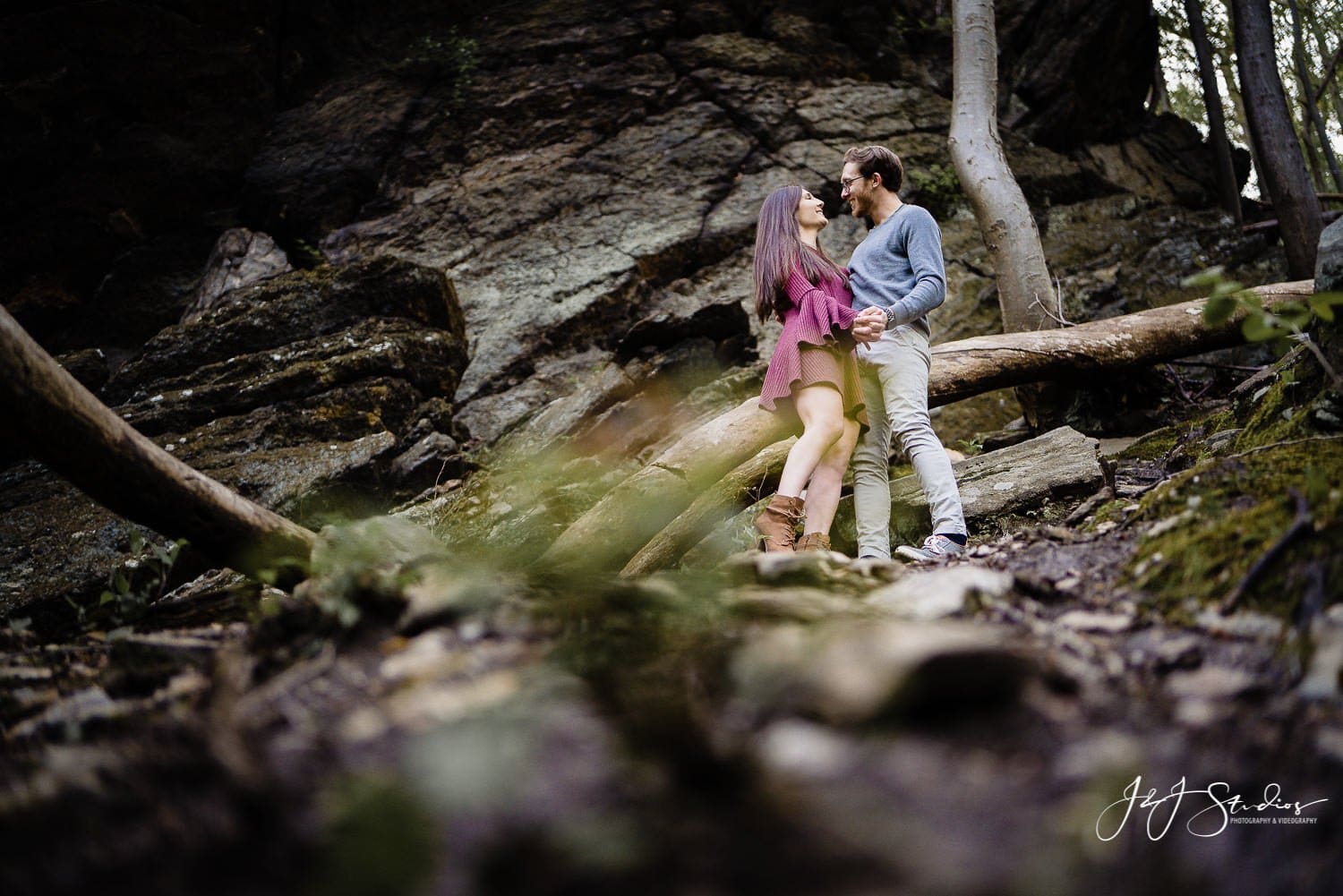 Taylor and Danny, quintessential nerds, met in a Statistics class during their Master’s program.  As statistics would prove, Taylor began spending much more time with Danny than all the other boys, making him a clear outlier. Finally, she had to face it…Danny was her statically significant other.

The two have a great love of the outdoors, as evidenced by the romantic way Danny proposed.  Per Taylor, “Danny had a picnic set up on Sunset Cliffs in San Diego, California. As the sun started to set he got down on one knee and popped the question!!” 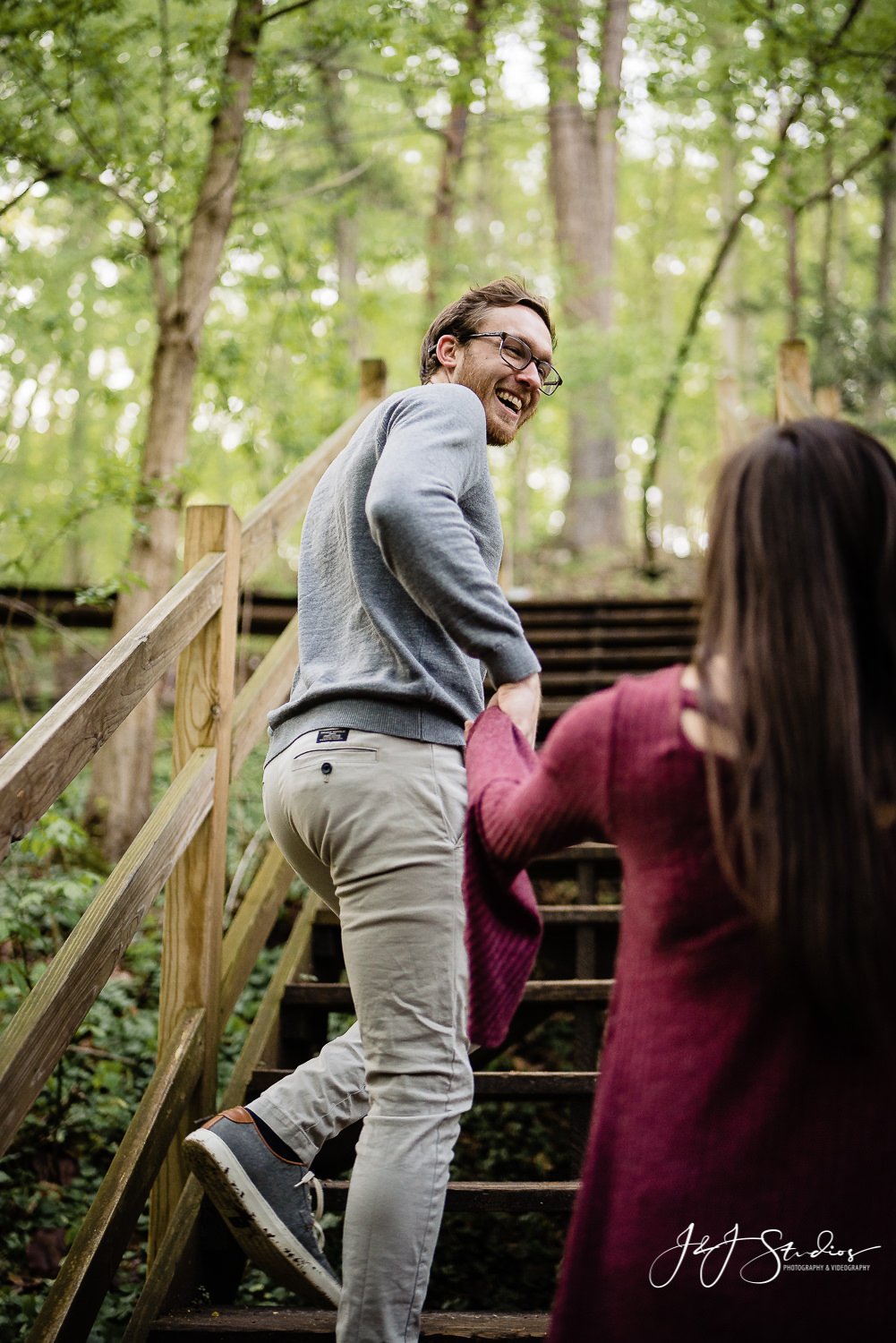 From the Photographer: I first met Taylor and Danny during the yearly bridal expo at the PA Convention Center. Taylor and Danny were one of our lucky engagement session winners and we set out to plan a beautiful engagement session with them at Wissahickon Park. They had a genuine joie de vivre and I wanted to capture that during their session. I use a combination of editorial realism and persistence to catch authentic moments throughout the shoot. I set the scene, but then let moments unfold around me to capture genuine emotion.  So many times during the shoot I heard Danny whisper, “I love you so much.” and while I was flattered, I think it was meant for his beautiful bride to be. I wanted to capture those in-between moments, those interactions and corresponding reactions to such tender words to give them a set of enduring photos they will cherish and remember for many years.  I hope these images adorn their walls and they look at them many years from now and remember this special time in their lives. 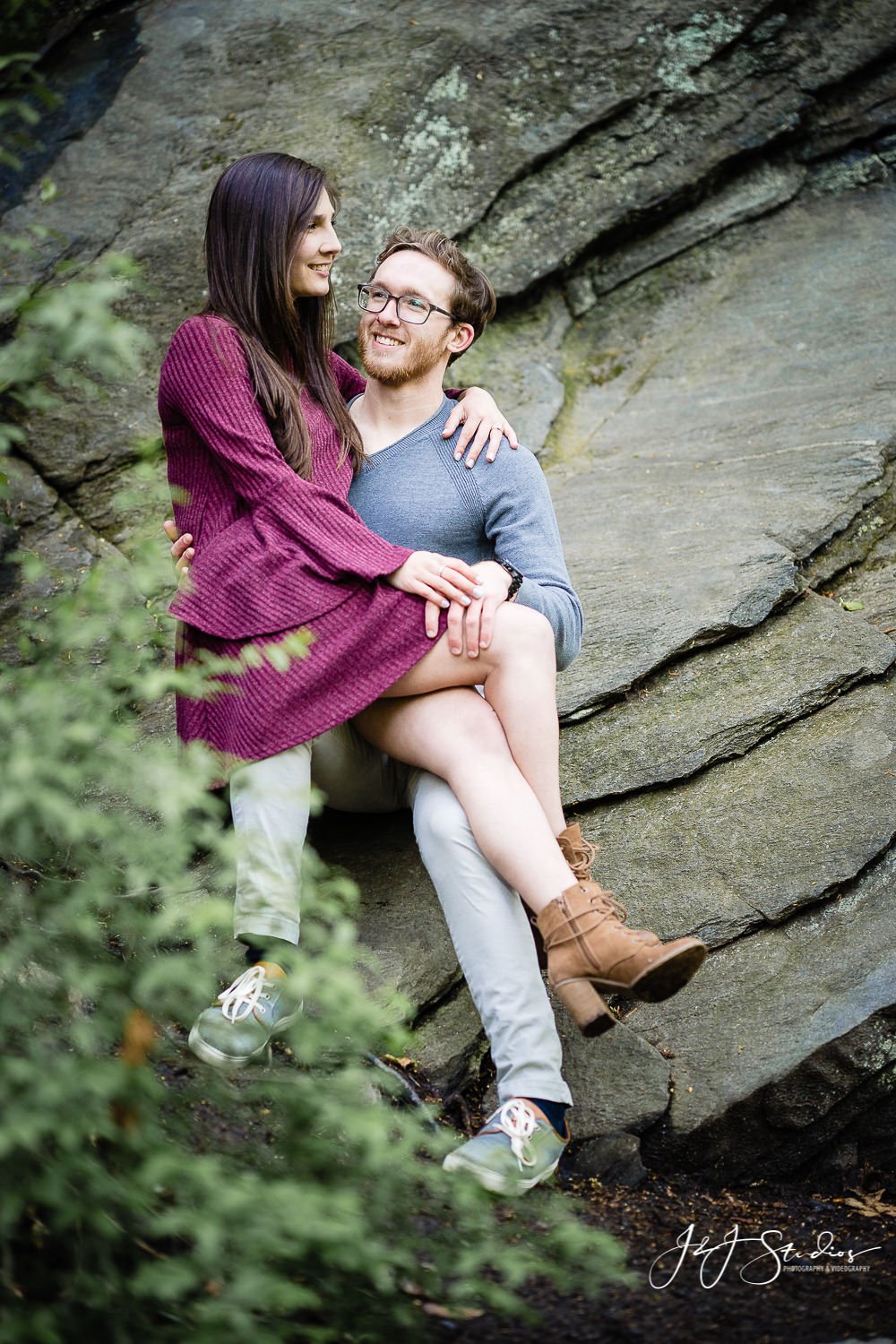 From Taylor: I love that Danny cares about the world around him. He wants to help people, animals, and the environment alike.

From Danny: I love that Taylor is the most compassionate and empathetic human I have ever met. She takes the time to understand you for who you truly are. She lives her life freely, chasing new experiences, and has become the best part of each and every one of my memories that she has helped me make. 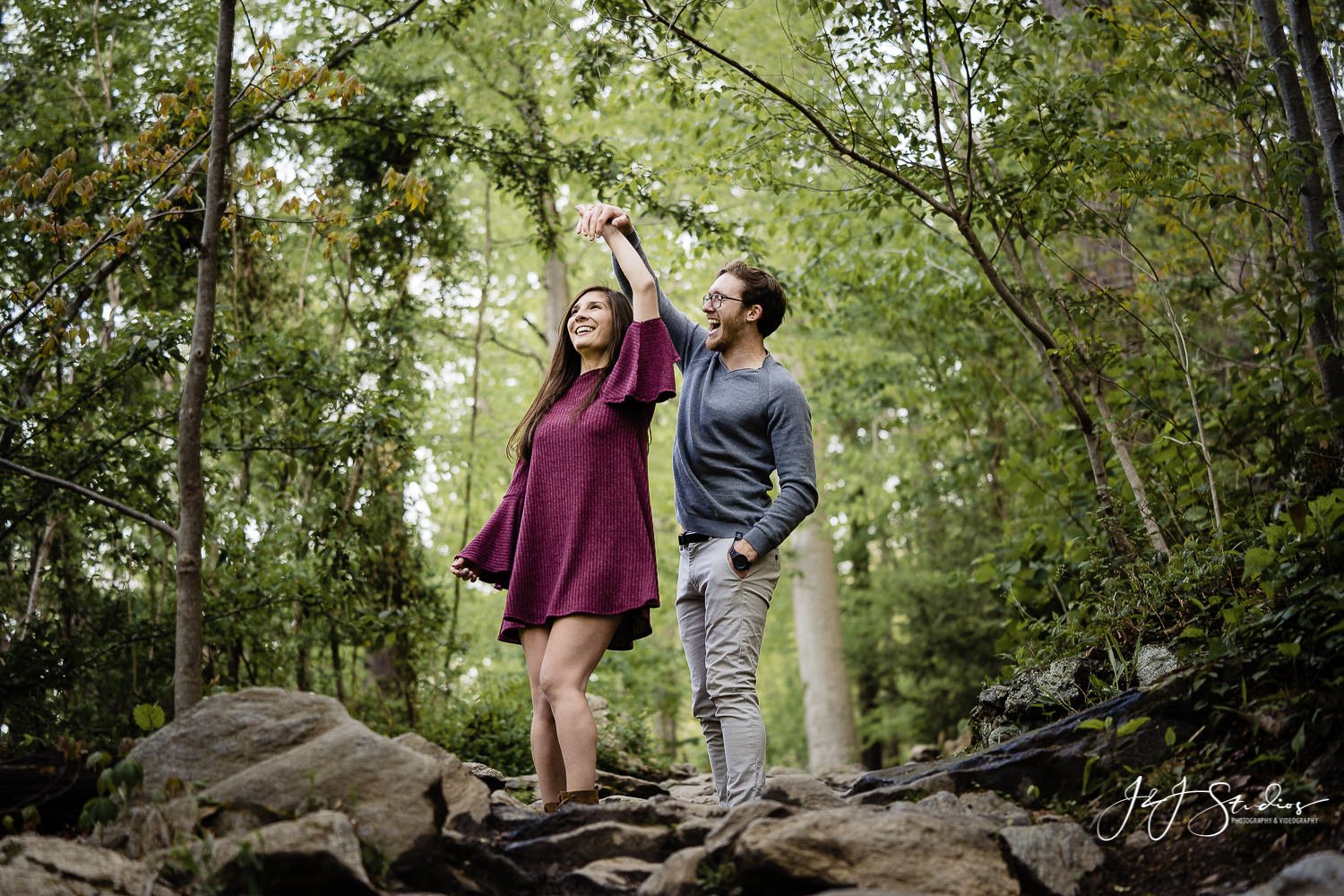 From the Photographer: After some rather tame shots on solid ground, I thought it would look cool if they stood on a rock in the middle of the creek.  To my surprise, they were completely on board. You can’t tell in the picture, but both I and the couple commented that “Boy the water really is moving quite fast.” Luckily, no one fell in, and we got the shot we needed. 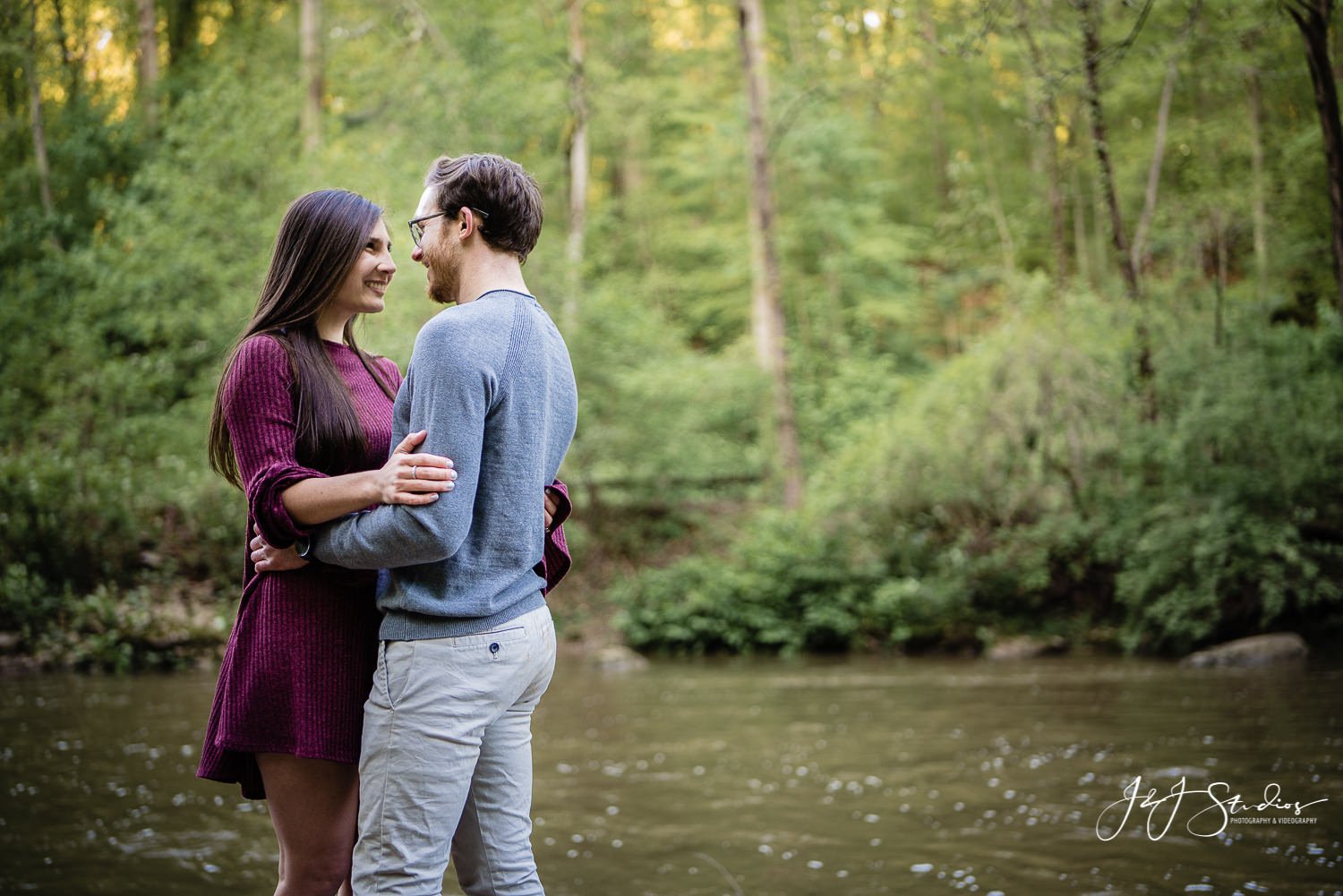 Here’s another picture where I positioned the couple pretty much on a ledge by the Creek and my camera base was literally touching the water while I straddled two rocks.  Good thing I have insurance. This ended up being one of my favorite images from the shoot so the pulled hamstring was worth it.  The subtle sun flare was later added in post-production as it augments the light already flowing through the trees at their back. 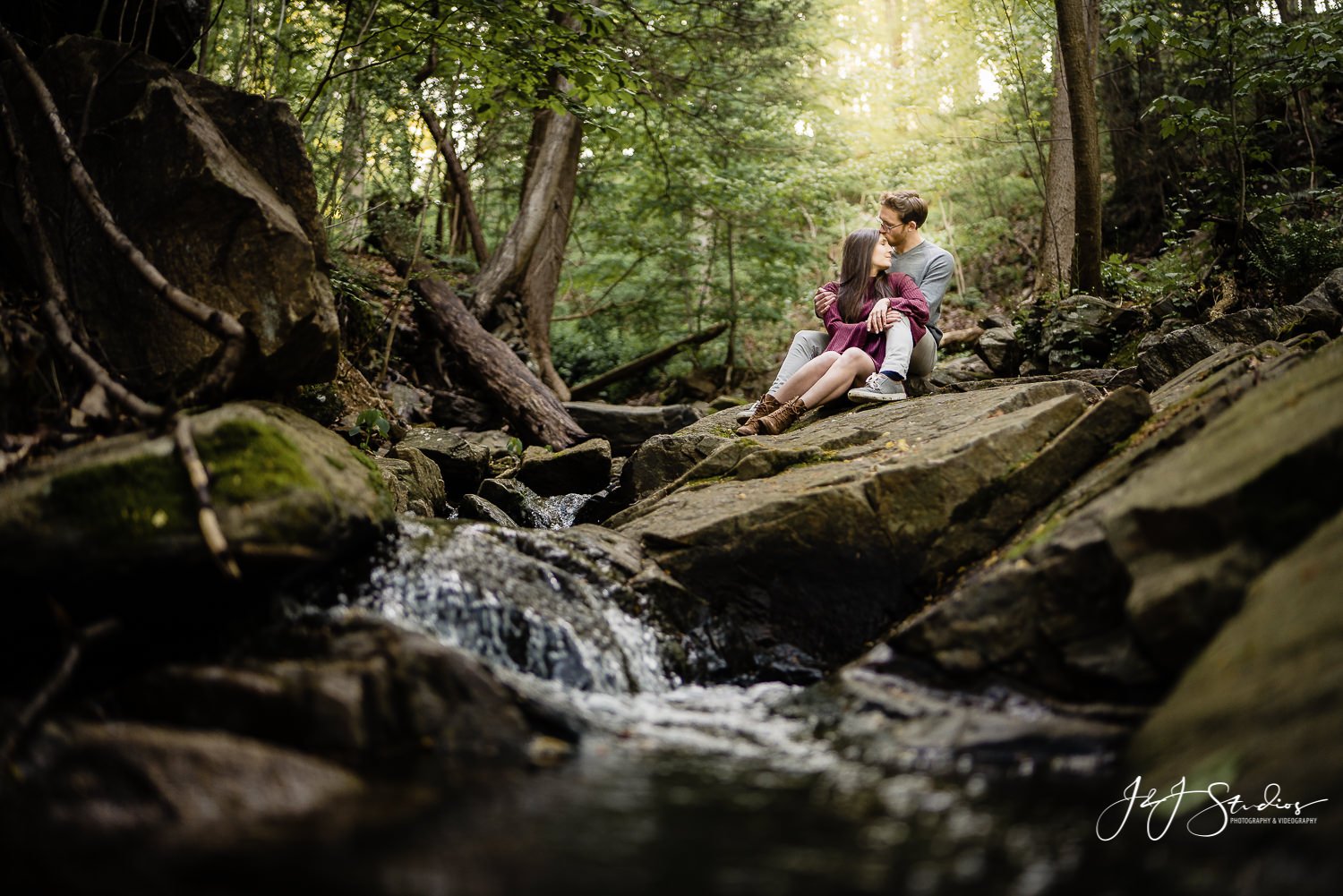 We are book nerds- we have over 200 books in our library and we collect antique books.

We both use to study animal encyclopedias as children.

We are now foster parents of cats and dogs. 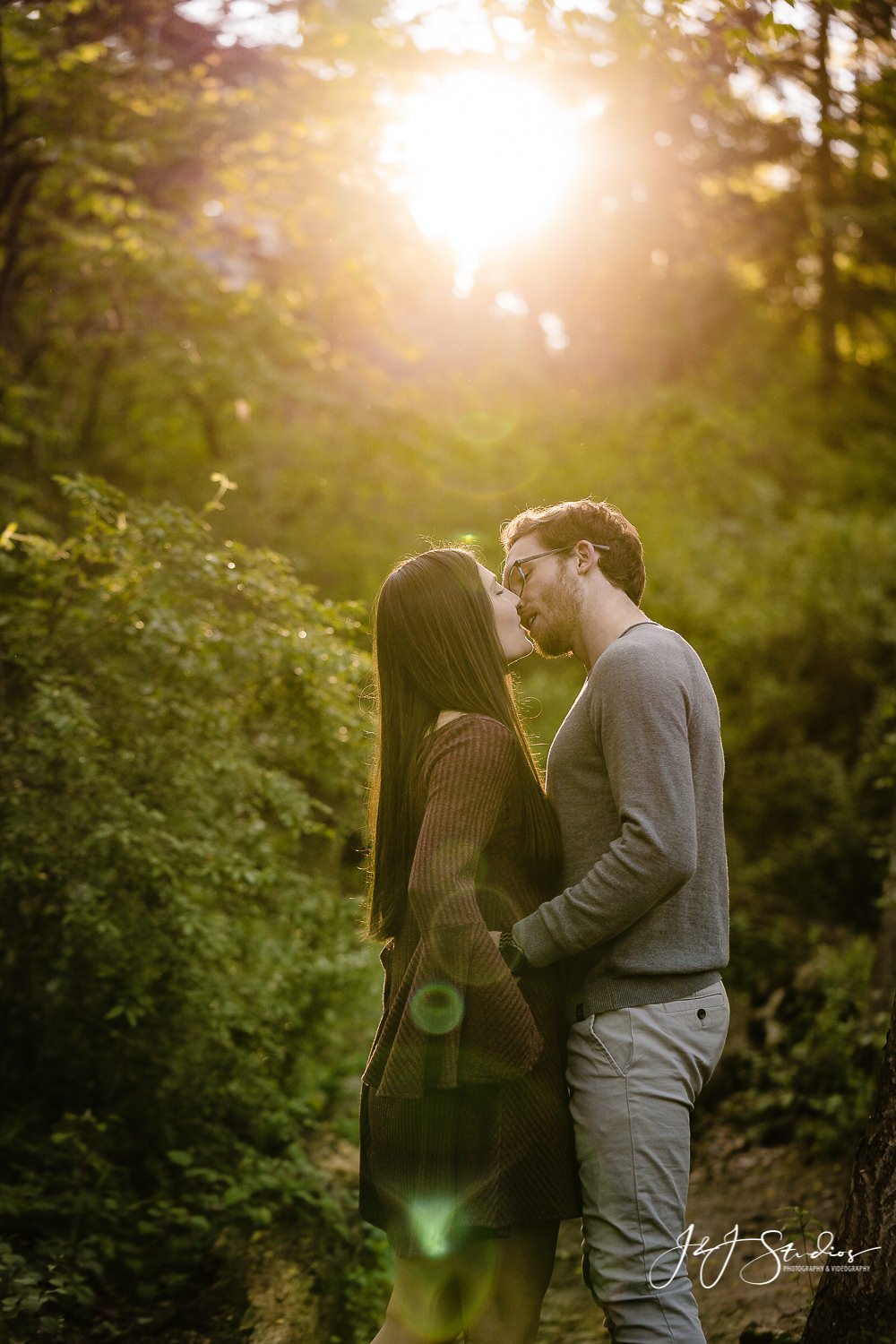 We ended the shoot with some sunrise pictures (yes it was about 7:00am) so we wouldn’t have any pesky background people.  Pro tip: If you want clean backgrounds, do your shoot at sunrise not sunset, especially if you will be in a high traffic area.  In this image, we have Taylor and Danny almost kissing.  I kind of like the almost kiss better than a real kiss here so we can focus on their facial profiles and features rather than the typical kissing shot. 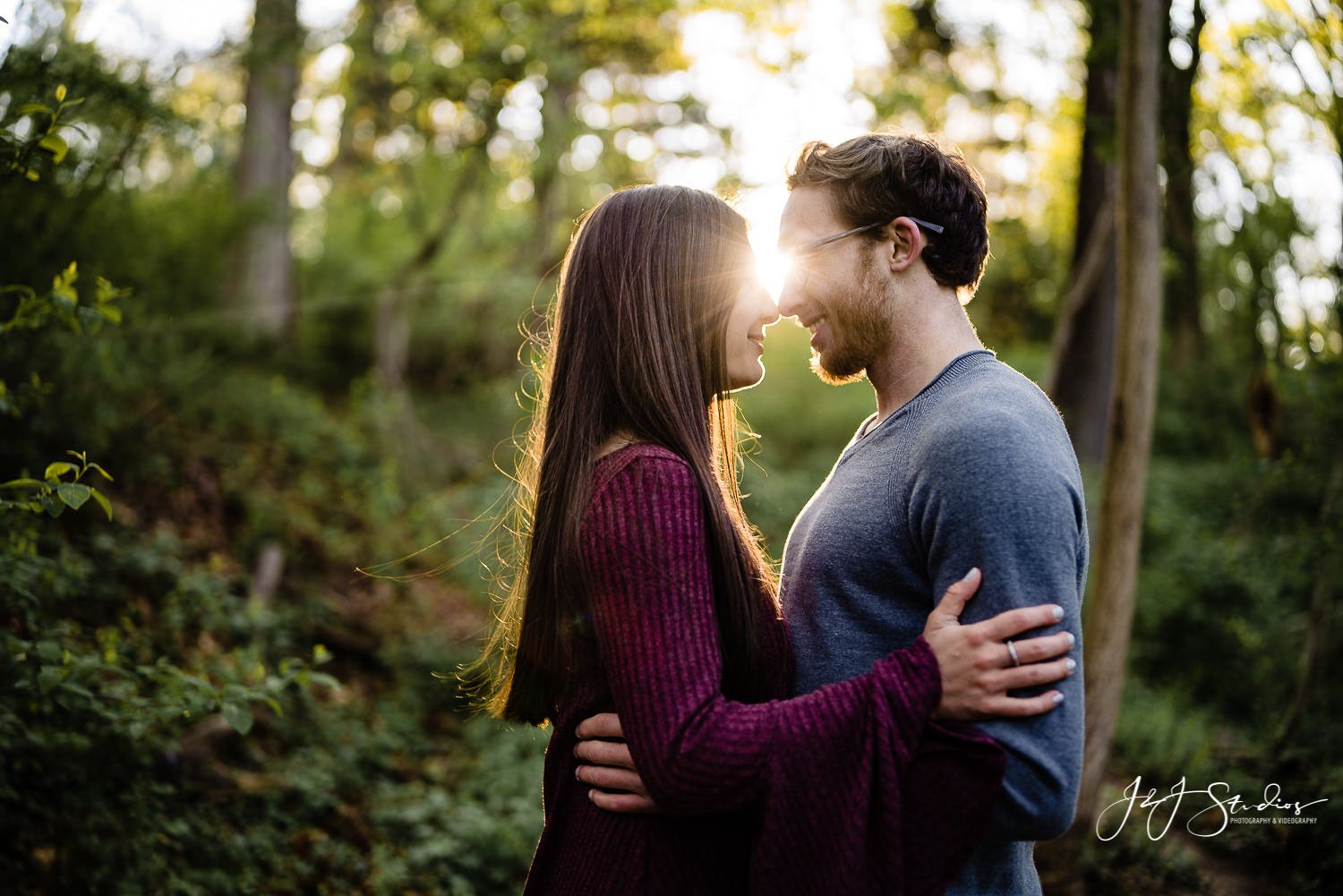 In this picture, I wanted us to focus on the mouth and smile so I deliberately put the sun where their eyes should be.  This is definitely one of my signature pictures as I tend to do this with a number of couples.  It yields such a pretty, visually appealing picture that most times I feel compelled to include it. 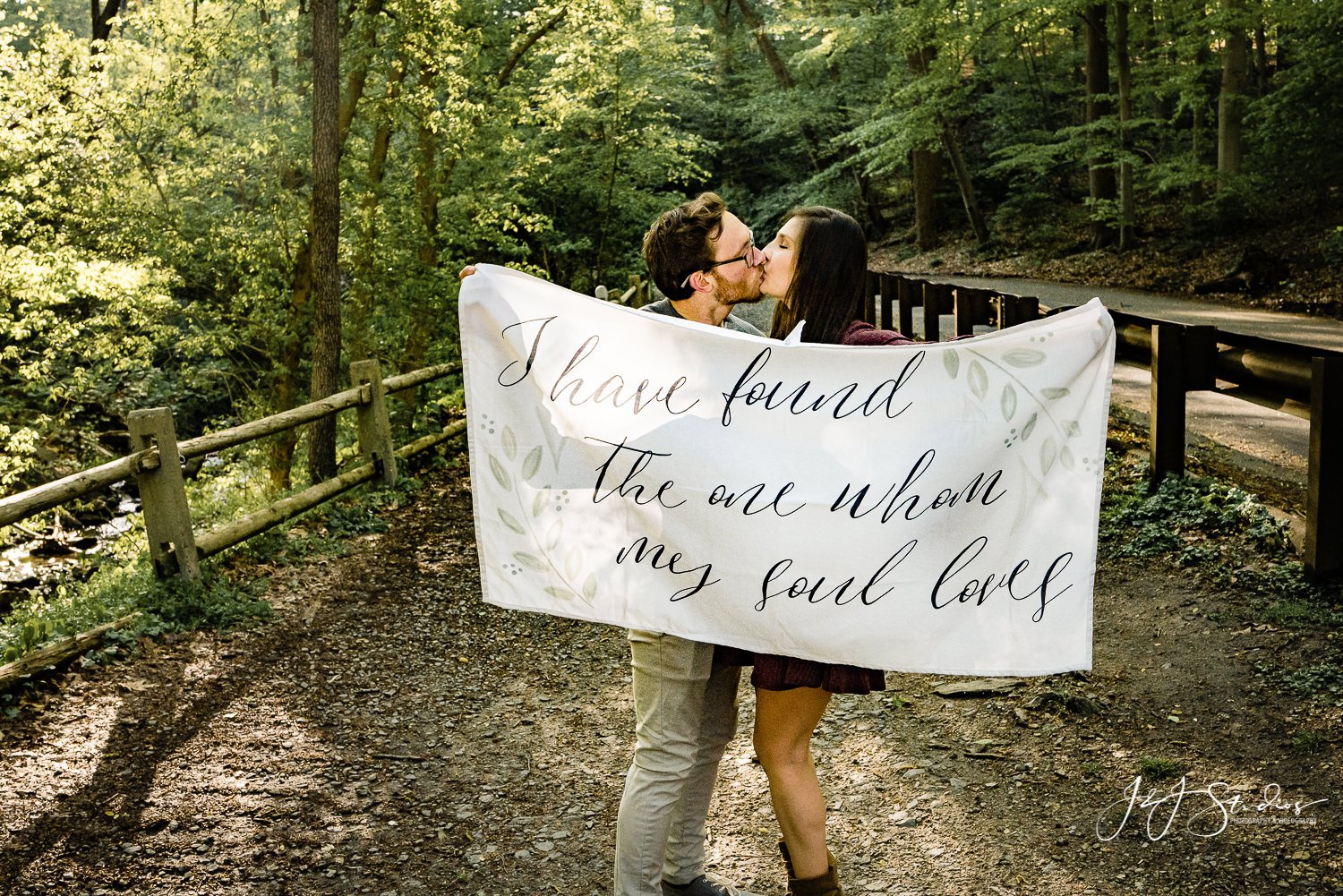 The bride’s sister gave them the banner, “I have found the one whom my soul loves.” While we are not very big on props for engagement shoots, we definitely will incorporate them by request. This is a simple lighting setup using the sun as a backlight to give the couple a golden outline.  Other popular props may include dogs, banners, ribbons, or chalkboards with the wedding date or couple’s name. If you bring it, we will make sure it gets included. 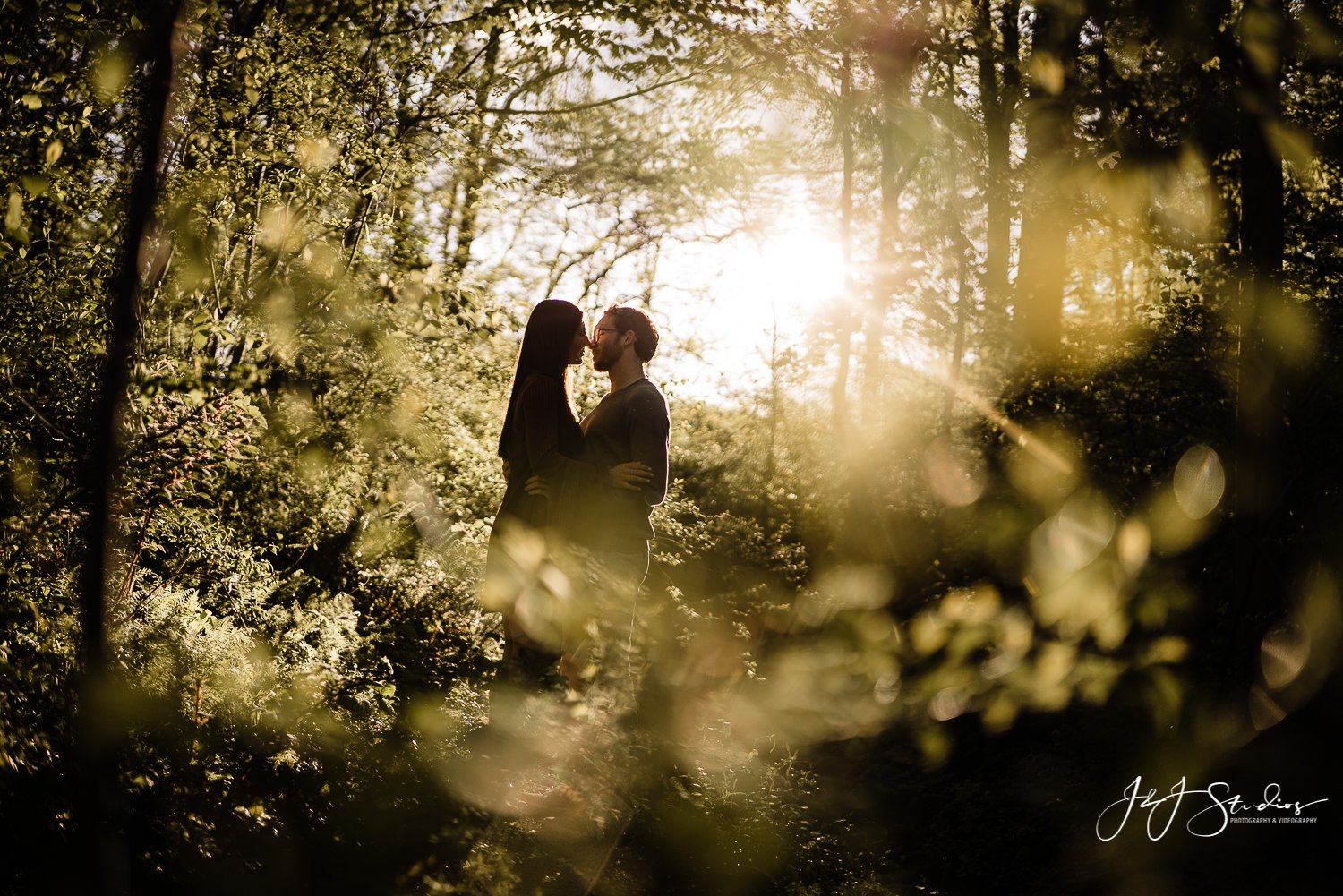 We always try to incorporate natural sunlight if possible.  In this picture, the sun was rising behind the couple, and we just found some bushes to shoot though to produce some beautiful foreground bokeh.  This would look great as a large canvas on their wall. 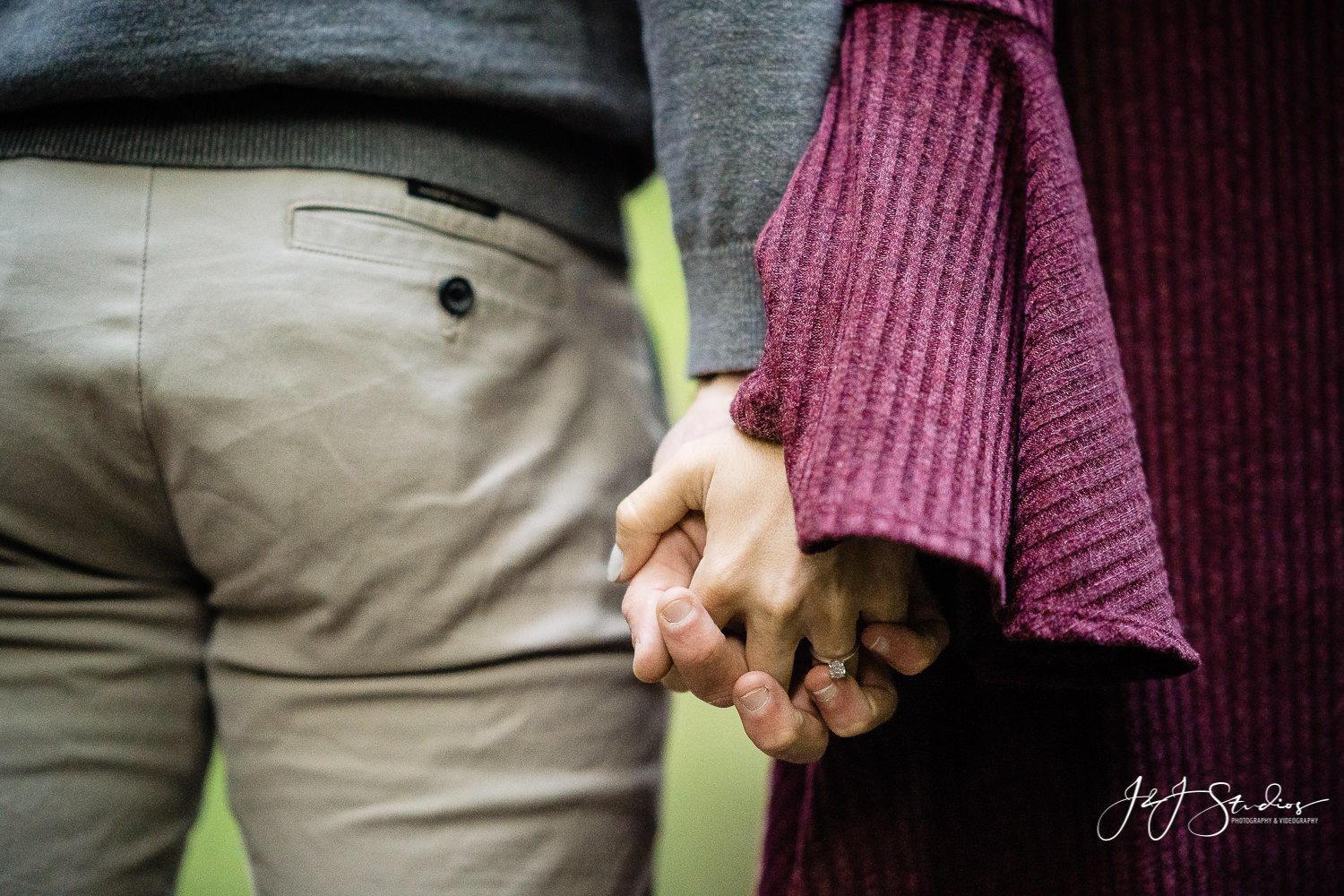 We also love incorporating close up details. Sometimes when we hone in on the smaller details, the image tells a much more compelling story than if we had focused on a broader shot. 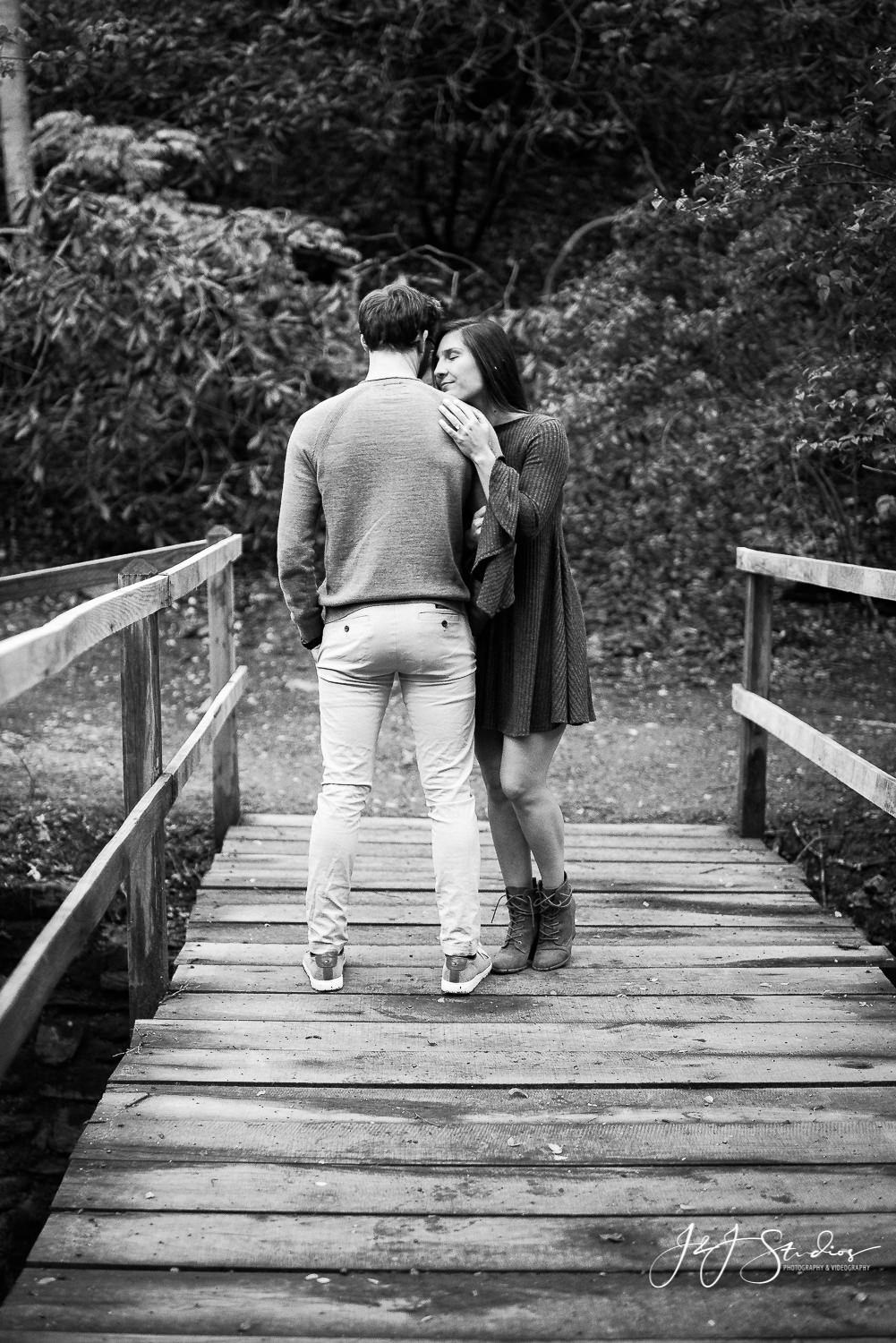 The same goes for black and white photos. When we take out the color, we are forcing a greater focus on the expression and the emotion of the image. In our opinion, this image is about the emotion of the couple, so the color is not doing much to enhance that emotion, so we remove it.

Here are some more favorites from our Wissahickon Creek Engagement Shoot.  In case you are wondering, these poses do not have heavy directing. We pose the couple in a general area and then kind of “let things happen.” This is what I like to call editorial realism–posing that looks very natural and unforced. We try to get as close to photojournalism as we can, while still keeping in mind what our clients expect–bold, beautiful imagery with style and flair. 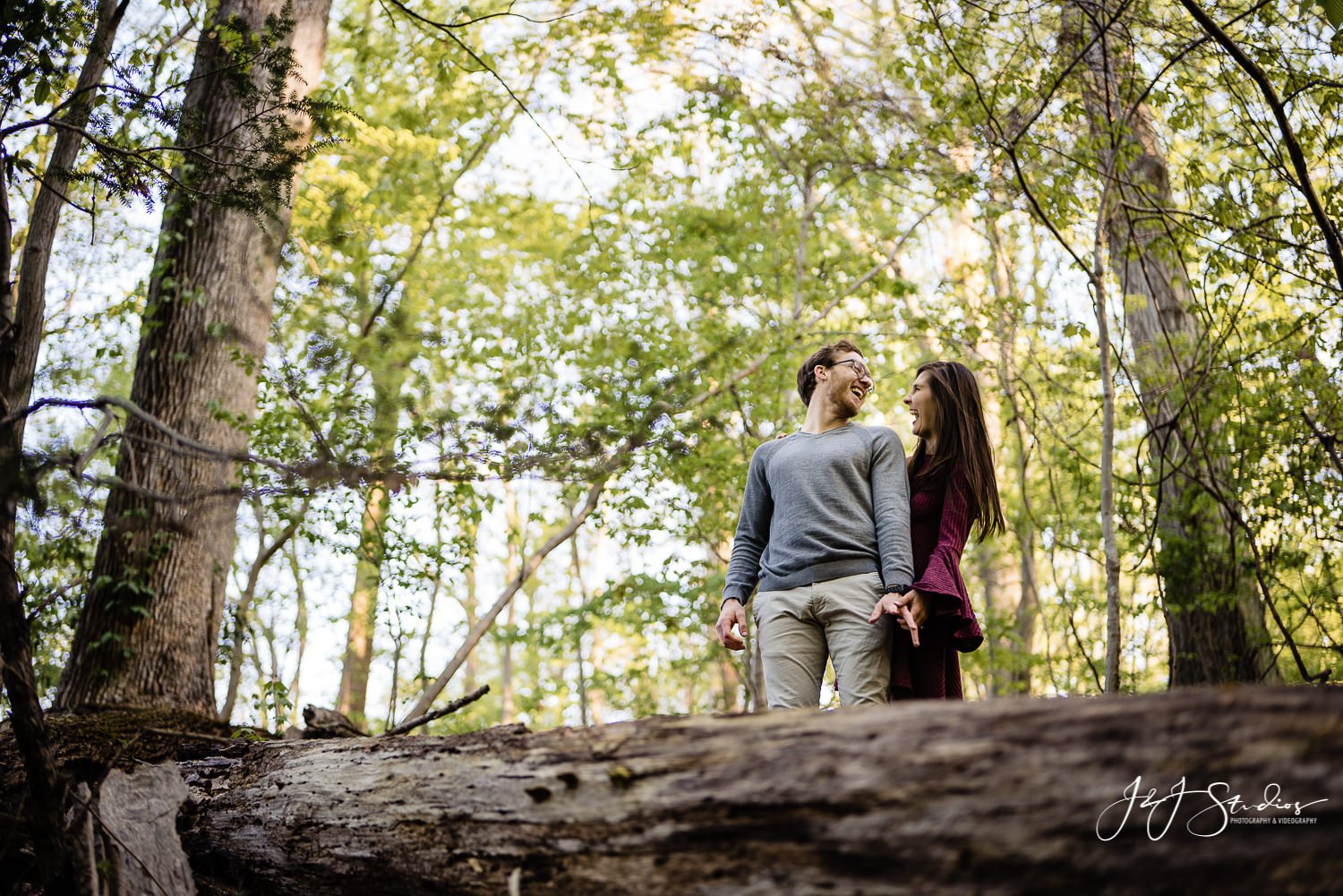 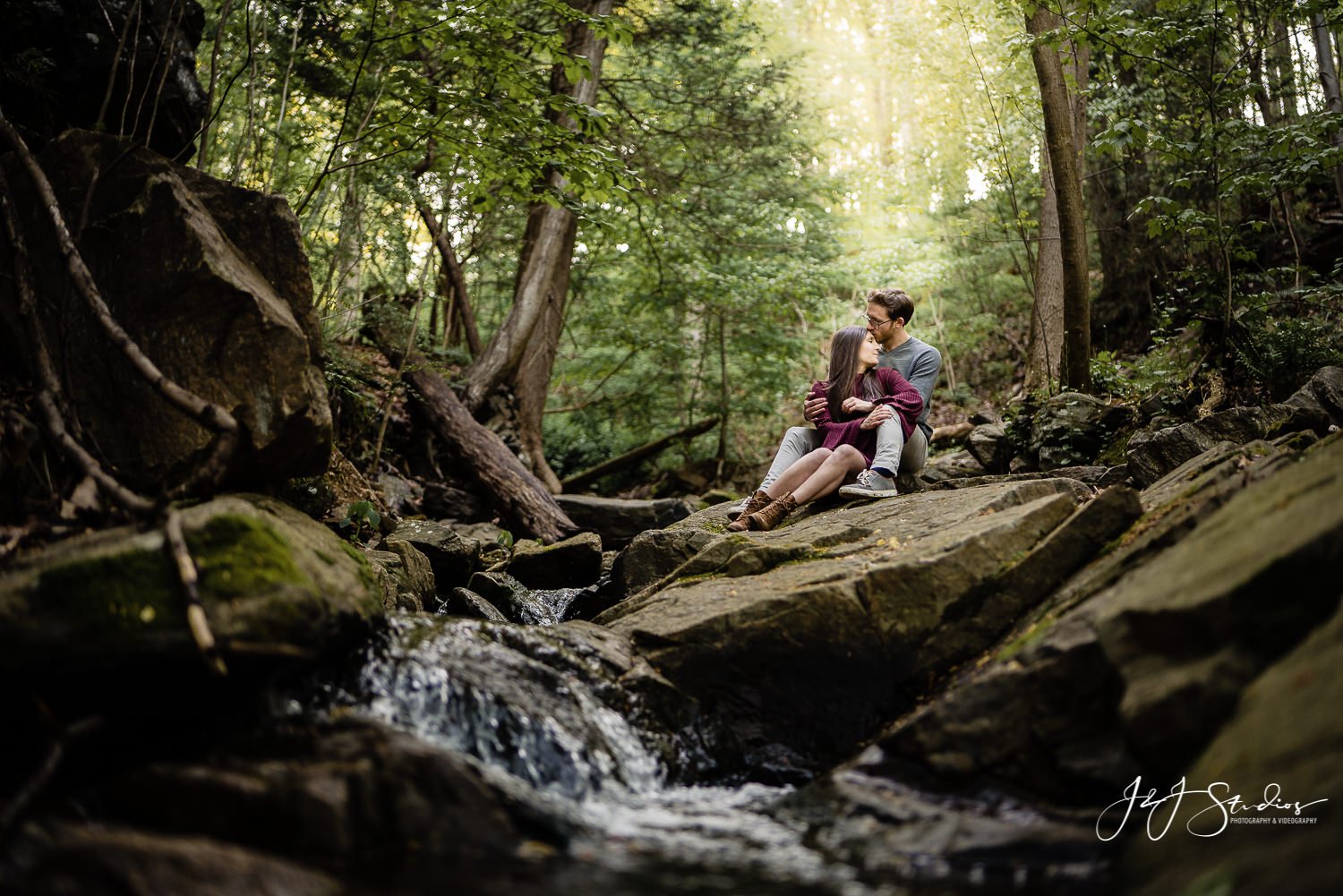 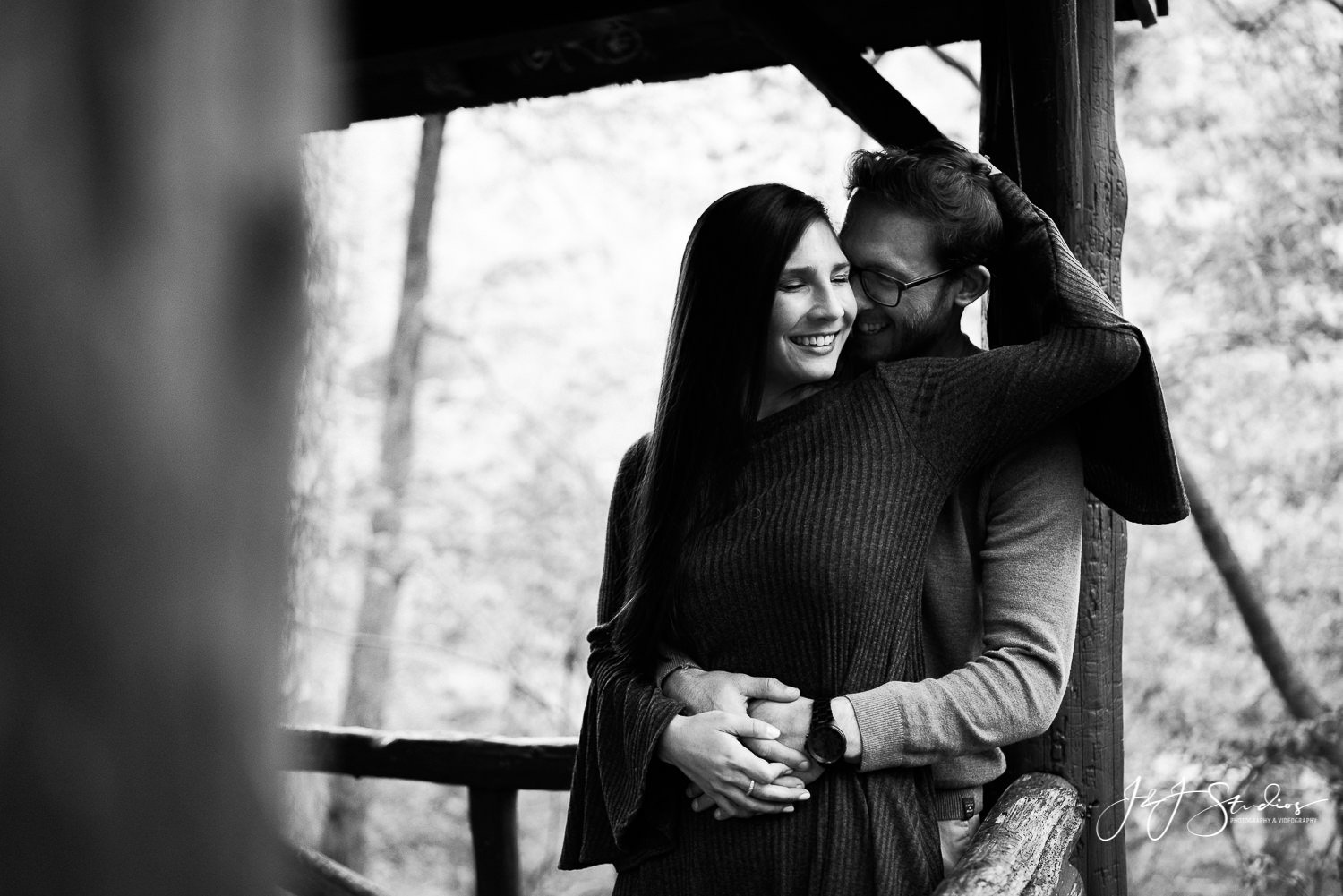 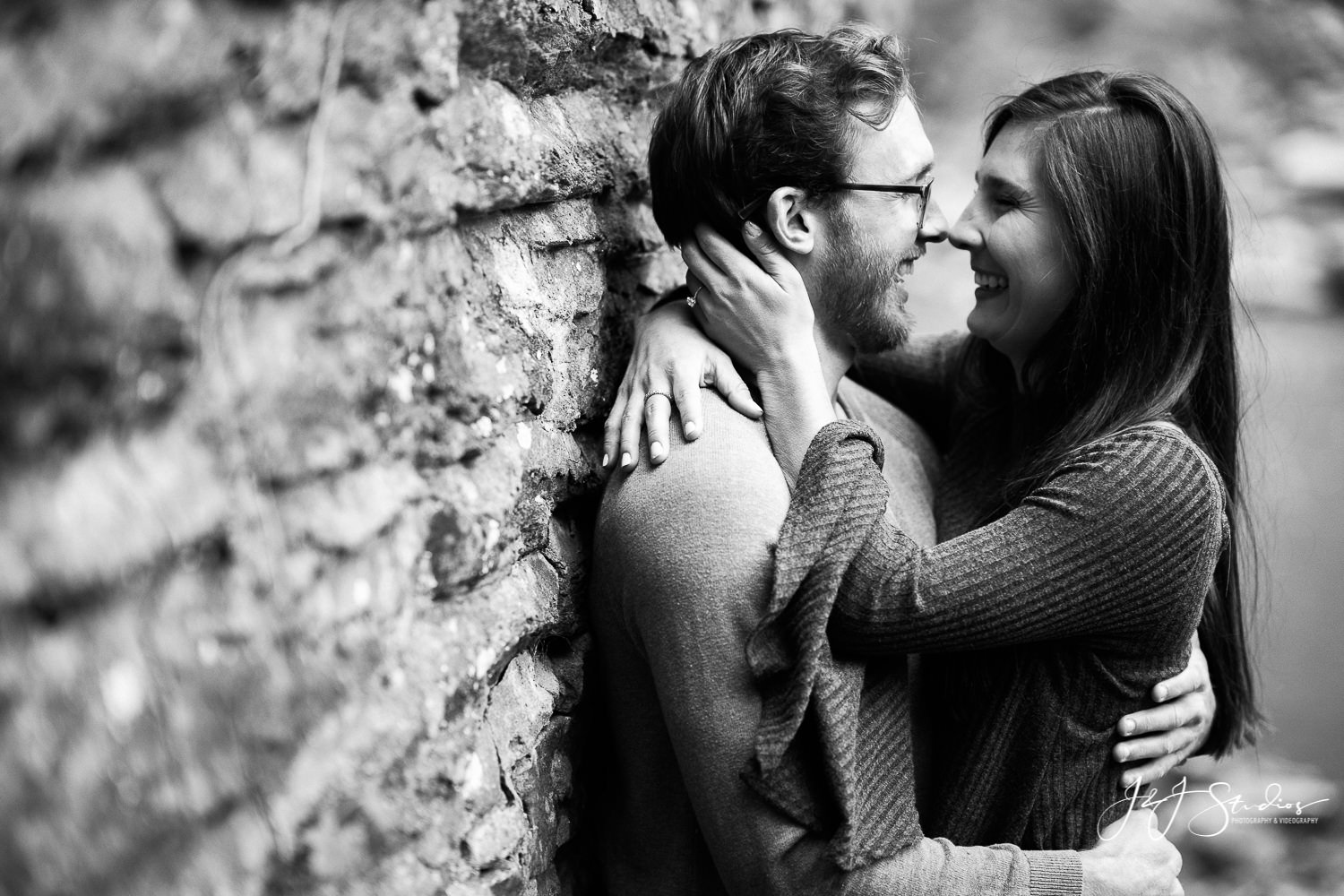 If you need help choosing an engagement location in Philadelphia, contact us today. We have a variety of location suggestions and can help custom tailor an engagement session to your exact needs.

Author: John Ryan. John Ryan is a wedding and portrait photographer based in Philadelphia. When not taking pictures he enjoys restaurants, wine, travel and fitness. He is the occasional gamer as well. He and his wife Vanessa run the company and provide wedding photography and video services for clients all over the greater Philadelphia area, NJ, NY and DE. Fun fact, more often than not, I’ll always have a granola bar stash at weddings. The carbs keep the energy high for crazy 14 hour days. If you need a snack, just ask and chances are I’ll have something nearby.

Fill out the contact form below if you’d like to schedule a consultation for an engagement session.